I think the worst time to have a heart attack is during a game of charades.

Demetri Martin
It is illegal to yell fire in a crowded theater. If there is a fire, please yell something else instead, like Flames! or Smoke maker! or Bad hot!

Demetri Martin
Whenever I investigate a smell, I find that the answer is always bad. It's never: 'What is that? [sniff] muffins'!

Demetri Martin
I am what I eat. And I am this especially when I bite my nails.

Demetri Martin
To some I am known as Chief. And these are usually people who work in Radio Shack or try to sell me shoes. To others I am known as Buddy. These are people who dwell in bars and wonder if I've got a problem or what it is that I am looking at. And to still others, who are in that same bar, standing just off to the side, I am Get Him!

Demetri Martin
The best way to make somebody feel important is to try to assassinate them.

Demetri Martin
Drunken behavior will not be tolerated, except by those who are being hilarious.

Demetri Martin
The bird, the bee, the running child are all the same to the sliding glass door.

Demetri Martin
As soon as I jumped out of the airplane, I realized I had forgotten my parachute. Thank God we were still on the runway.

Demetri Martin
I am sometimes referred to as Excuse Me in an annoyed tone of voice, because apparently I am in the way. I am so sorry. I am supposed to be some sort of mind reader, I guess. I am moving out of the way now as slowly as I possibly can. I am doing this and there's nothing you can do about it.

Demetri Martin
Socrates became a trendsetter. Other philosophers, including Plato and Aristotle and Gus, quickly followed suit, dropping their last names too. And, for centuries after that there would be countless imitators including oltaire, Michelangelo, and, much later, Cher.

Demetri Martin
Reality is a concept that depends largely upon where you point your face.

Demetri Martin
A know-it-all is a person who knows everything except for how annoying he is.

Demetri Martin
You never forget your first kiss. And that's what makes it so hard to forgive my uncle.

Demetri Martin
REGARDING THE MARCHING BAND: How much more interesting it would be to see a creeping band.

Demetri Martin
Whenever I'm on my computer, I don't type 'lol'. I type 'lqtm': 'laugh quietly to myself'. It's more honest.

Demetri Martin
Villains fear me because I am unpredictable and broccoli. See what I mean?

Demetri Martin
Leave no stone unturned in your quest to disrupt a rock garden.

Demetri Martin
The lord works in mysterious ways. Indeed. And a shorter way to say that is: God is a sneak.

Demetri Martin
The Pursuit of Happiness: It sure seems to like a good chase, doesn't it?

Demetri Martin
Most of the people I hang out with are comedians. Most of the comedians I know are passionate about what they do. And all of them like to talk about comedy. It's wonderful. There is a special camaraderie that comes from the shared experience of bombing in front of groups of strangers. Because, while it's great to see one of your friends tell an "I wish I thought of that" joke, it's hilarious to watch them tell an "I'm glad I didn't think of that" joke.

Demetri Martin
The plastic knife is perfect for when a person just wants to make some marks on his food and get insanely frustrated at the same time. 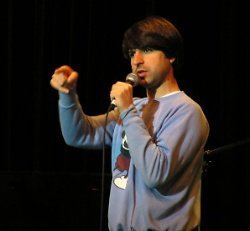 Creative Commons
Born: May 25, 1973 (age 46)
Bio: Demetri Evan Martin is an American comedian, actor, artist, musician, writer, and humorist. He is best known for his work as a stand-up comedian, being a contributor on The Daily Show, and his Comedy Central show Important Things with Demetri Martin.
Known for:
Most used words:
people, walrus, russian