The tea party is forming its own debt super committee that will meet this week at a Florida Denny's. You do not want to be the waiter that adds the tax to their check.

Conan O'Brien
Studies are showing that Republican candidates are buying a lot of their ad time on the Weather Channel. You can tell because last night, the weatherman blamed the cold front on immigration and gay marriage.

Conan O'Brien
Today I interviewed a squirrel in my backyard and then threw to commercial. Somebody help me.

Conan O'Brien
A woman gave birth on an airplane. The airline said that the woman and her new $40 carry-on are doing just fine.

Conan O'Brien
Toyota's getting a lot of attention. Yeah, Toyota has unveiled a new state of the art design for a car of the future. Yeah. The car is so advanced that when it's recalled it can actually drive itself back to the Toyota dealer.

Conan O'Brien
The British government has urged its citizens to abstain from alcohol at least two days a week. Or to make it easier to remember, whenever they brush their teeth.

Conan O'Brien
There are 17 more shopping days until Christmas. So, guys, that means 16 more days till we start shopping, right?

Conan O'Brien
Today President Obama is visiting the hometown of House Speaker John Boehner. Obama plans to give a speech and then visit the tanning bed that Boehner grew up in.

Conan O'Brien
Now that this mess is almost behind me – I just have one last request: HBO, when you make the movie about this whole NBC late night fiasco, I'd like to be played by Academy-Award winning actress Tilda Swinton.

Conan O'Brien
The U.S. Census Bureau reports that American homes are 650 square feet larger today than they were in 1980. Unfortunately, so are most Americans.

Conan O'Brien
NASCAR is trying some new initiatives to go green, including planting trees and using ethanol fuel. Most controversial is the idea of having NASCAR drivers carpool in the race.

Conan O'Brien
According to a recent survey, kids are receiving an average of 40 cents less from the tooth fairy. That's right, the economy is so bad that even make-believe people are feeling the pinch.

Conan O'Brien
The oil industry says that if they are allowed to drill more, they can create a million jobs. Of course, most of those jobs would be cleaning oil off of ducks.

Conan O'Brien
According to Forbes magazine, in the past year Taylor Swift has earned $170 million. When she heard that, Hillary Clinton said, "I didn't know she gave speeches."

Conan O'Brien
Starbucks says they are going to start putting religious quotes on cups. The very first one will say, 'Jesus! This cup is expensive!'

Conan O'Brien
The White House sent Vice President Joe Biden to China today. So now we owe them a trillion dollars AND an apology.

Conan O'Brien
The New York Mets are planning to move the walls of Citi Field in order to increase the number of homeruns they hit. Call me old fashioned but isn't that what steroids are for?

Conan O'Brien
Pope Francis has warned the media to stop spreading false information. Or as the media reported it, "World's Top Rabbi Says 'Keep Up the Good Work!'"

Conan O'Brien
There's a new social network just for senior citizens. Actually, we're just sending them to MySpace and telling them it's new.

Conan O'Brien
The reading scores on the SATs have reached an all time low. Or, as the headline put it, "SATs Be Most Baddest." 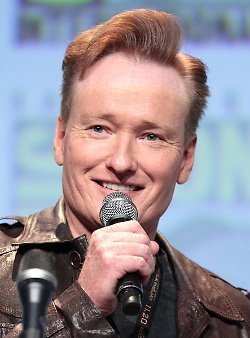