And yet I don't know. And yet I don't know!
The sewing machine that cost me twenty guineas or so.
And that would buy plenty of linen and thread
And things that are hand-made are best, so it's said.
It's not that I'm mingy - although I'm half Scotch.
I know what I'll buy her. A Ingersoll watch.

Stanley Holloway
My knees started knocking, I did feel so sad.
Then Brown said, "Don't die in a pub, it looks bad,"
He said, "Come with me, I'll show you what to do.
Now I've got a friend who'll be useful to you."
He led me to Black's Undertaking Depot,
And Black, with some crepe round his hat said, "Hello,
My word you do look queer!"


Stanley Holloway
I crawled in the street and I murmured,"I'm done."
Then up came Old Jenkins and shouted,"Oh son!"
"My word you do look well!
My word you do look well!
You're looking fine and in the pink!"
I shouted, "Am I? Come and have a drink!
You've put new life in me,
I'm sounder than a bell.
By gad! There's life in the old dog yet.
My word I do feel well!"


Stanley Holloway
Now my sister's daughter, Elizabeth May
Is going to get married next Sunday, they say
Now what will I buy her? She's such a nice girl.
I think a piano will do very well.
I saw one today, 'twas a beauty I found.
Only ninety-five guineas. I'll have it sent round.


Stanley Holloway
Up rode the Duke on a loverly white 'orse,
To find out the cause of the bother,
He looked at the musket and then at Old Sam,
And he talked to Old Sam like a brother 'Sam, Sam, pick oop tha' musket'
The Duke said as quiet as could be,
'Sam, Sam pick oop tha' musket,
Coom on lad, just to please me 'Alright Duke,' said Old Sam, 'just for thee I'll oblige,
And to show thee I meant no offence',
So Sam picked it up, 'Gradely, lad' said the Duke,
'Right-o boys... let battle commence.'


Stanley Holloway
It occurred on the evening before Waterloo,
And troops were lined up on parade,
The Sergeant inspecting 'em he was a terror,
Of whom every man was afraid All excepting one man who was in the front rank,
A man by the name of Sam Small,
And I'm and the Sergeant were both 'daggers drawn',
They thought 'nowt' of each other at all 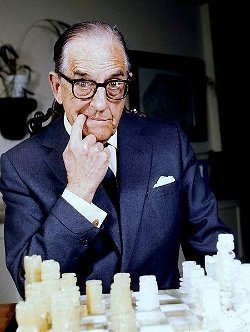 Creative Commons
Born: October 1, 1890
Died: January 30, 1982 (aged 91)
Bio: Stanley Augustus Holloway was an English stage and film actor, comedian, singer, poet and monologist. He was famous for his comic and character roles on stage and screen, especially that of Alfred P. Doolittle in My Fair Lady.
Known for: