Like us many have spoken over this spring, but they were gone in the twinkling of an eye.
We conquered the world with bravery and might, but we did not take it with us to the grave.

Babur
I have not written all this to complain: I have simply written the truth. I do not intend by what I have written to compliment myself: I have simply set down exactly what happened. Since I have made it a point in this history to write the truth of every matter and to set down no more than the reality of every event, as a consequence I have reported every good and evil I have seen of father and brother and set down the actuality of every fault and virtue of relative and stranger. May the reader excuse me; may the listener take me not to task.

Babur
My own soul is my most faithful friend. My own heart, my truest confidant.

The most important things are the hardest to say, because words diminish them.
Stephen King 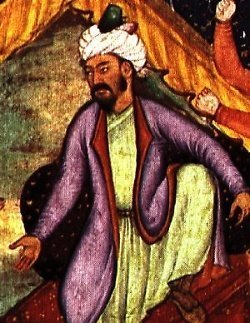 Creative Commons
Born: February 14, 1483
Died: December 26, 1530 (aged 47)
Bio: Babur, born Ẓahīr-ud-Dīn Muḥammad, was a conqueror from Central Asia who, following a series of setbacks, finally succeeded in laying the basis for the Mughal dynasty in the Indian subcontinent and became the first Mughal emperor.