Michael Jackson
The most conspicuous thing about suffering is, as W.H. Auden once observed, its banality. The day is green, the sun is shinging, someone is eating, or opening a window, the torturer's horse is scatching its innocent behind on a tree, and in a mere second someone we love is dead.

Michael Jackson
I'm actually relaxed onstage. Totally relaxed. It's nice. I feel relaxed in the studio too. I know whether something feels right. If it doesn't, I know how to fix it. Everything has to be in place and if it is you feel good, you feel fulfilled.

Michael Jackson
Before you judge me, try hard to love me, look within your heart
Then ask,—have you seen my childhood?

Michael Jackson
I want people to hear or watch something I've done and feel that I've given it everything I've got.

Michael Jackson
My attitude is if fashion says it's forbidden, I'm going to do it.

Michael Jackson
I love Elizabeth Taylor. I'm inspired by her bravery. She has been through so much and she is a survivor. That lady has been through a lot and she's walked out of it on two feet. I identify with her very strongly because of our experiences as child stars. When we first started talking on the phone, she told me she felt as if she had known me for years. I felt the same way.

Michael Jackson
Billie Jean is not my lover.
She's just a girl who claims that
I am the one,
But the kid is not my son.

Michael Jackson
I'm not going to spend
My life being a color
Don't tell me you agree with me
When I saw you kicking dirt in my eye
But, if you're thinkin' about my baby
It don't matter if you're black or white.

Michael Jackson
It's black, it's white, it's tough for you to get by.

Michael Jackson
It's been my dream since I was a child to somehow unite people of the world through love and music.

Michael Jackson
They told you don't you ever come around here
Don't wanna see your face you better disappear. The fire's in their eyes and their words are really clear. So beat it, just beat it.

Michael Jackson
There was more to life than the things you could hold in your hands or see with your eyes.

Michael Jackson
I'm really very self-confident when it comes to my work. When I take on a project, I believe in it 100%. I really put my soul into it. I'd die for it. That's how I am.

Michael Jackson
I'm not a comedian. I'm not a show host. I'm a musician. That's why I've turned down offers to host the Grammy Awards and the American Music Awards. Is it really entertaining for me to get up there and crack a few weak jokes and force people to laugh because I'm Michael Jackson, when I know in my heart that I'm not funny?

Michael Jackson
Hold me
Like a River Jordan
And I will then say to thee
You are my friend.
Carry me
Like you are my brother
Love me like a mother
Will you be there?

Michael Jackson
I can tell you there are rewards that go far beyond money and public acclaim and awards.

Michael Jackson
Often people just don't see what I see. They have too much doubt. You can't do your best when you're doubting yourself. If you don't believe in yourself, who will?

Michael Jackson
We're sending out our major love
And this is our message to you
The planets are lining up
We're bringing brighter days
They're all in line waiting for you.


Michael Jackson
This extravagant dwelling, as domineering as it was distant, brought home to me the intimateconnection between tyranny and abstraction, and put me in mind of John Berger's observation that "abstraction's capacity to ignore what is real is undoubtedly where most evil begins."

Michael Jackson
Needless to say, I love the interaction between the sexes; it is a natural part of life and I love women. I just think that when sex is used as a form of blackmail or power, it's a repugnant use of one of God's gifts.

Michael Jackson
Success definitely brings on loneliness. People think you're lucky, that you have everything. They think you can go anywhere and do anything, but that's not the point. One hungers for the basic stuff.

Michael Jackson
I believe in wishes and in a person's ability to make a wish come true, I really do. And a wish is more than a wish.. it's a goal that your conscious and subconscious can help make reality. 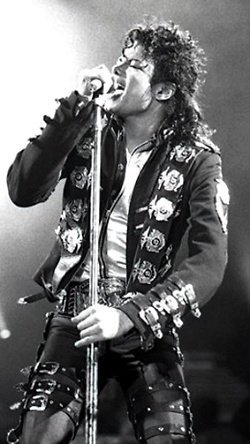 Creative Commons
Born: August 29, 1958
Died: June 25, 2009 (aged 50)
Bio: Michael Joseph Jackson was an American singer. Called the "King of Pop", his contributions to music, dance, and fashion along with his publicized personal life made him a global figure in popular culture for over four decades.
Known for:
Most used words:
love, work, people, music, true