I swayed upon the gaudy stern
The butt-end of a steering-oar,
And saw wherever I could turn
A crowd upon a shore.
And though I would have hushed the crowd,
There was no mother's son but said,
'What is the figure in a shroud
Upon a gaudy bed?'
And after running at the brim
Cried out upon that thing beneath
—It had such dignity of a limb—
By the sweet name of Death.
Though I'd my finger on my lip,
What could I but take up the song?
And running crowd and gaudy ship
Cried out the whole night long,
Crying amid the glittering sea,
Naming it with the ecstatic breath,
Because it had such dignity,
By the sweet name of Death. 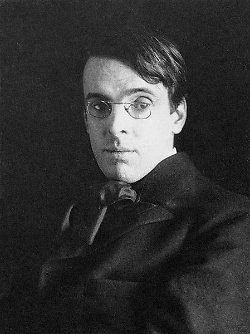