The heavy casualties, the constant retreat, the shortage of food and munitions, the difficulty of receiving reinforcements... all this had a very bad effect on morale. Many longed to get across the Volga, to escape the hell of Stalingrad.

Vasily Chuikov
Our units were tired. There were many whining pessimists in the army. I threw these panicky people out of the army right away and set to work. I told our men we could not retreat beyond the Volga... I believe that nowhere else in this war was there such bloody hand-to-hand combat. Nowhere else were bayonets and hand grenades used so widely as in Stalingrad... Lieutenant General Rodimtzev's division was first to arrive there and received the fierce German blow. Rodimtzev told me: 'We will fight to the last man, but we shall not leave the city.'... Our soldiers had only one idea. Stalin had ordered us not to retreat.

Vasily Chuikov
The battle of Kursk... the forcing of the Dnieper... and the liberation of Kiev, left Hitlerite Germany facing catastrophe.

Vasily Chuikov
I would not have believed such an inferno could open up on earth. Men died but they did not retreat.

Vasily Chuikov
He ordered us to stand fast and save Stalingrad. So we knew then that it was 'do or die.' We could not retreat.

Vasily Chuikov
Every German soldier must be made to feel that he is living under the muzzle of a Russian gun. 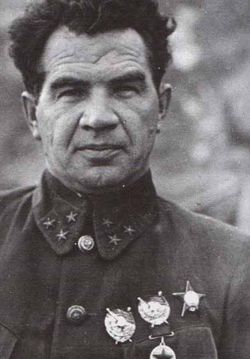