We plan alone but we fulfill our plans together with the enemy, as it were, in accordance with his opposition.

Ivan Konev
As for me, I had to know exactly what the situation was in Dukla Pass. Moscow had demanded it.

Ivan Konev
I do not want to give any orders to the airmen, but get hold of a Komsomol air unit, and say I want volunteers for the job.

Ivan Konev
Our neighbors use searchlights, for they want more light. I tell you, Nikolai Pavlovich, we need more darkness. 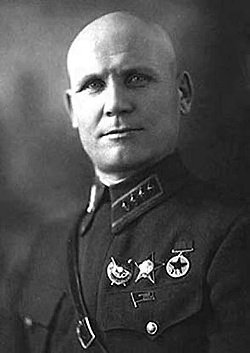 Creative Commons
Born: December 28, 1897
Died: May 21, 1973 (aged 75)
Bio: Ivan Stepanovich Konev was a Soviet military commander, who led Red Army forces on the Eastern Front during World War II, retook much of Eastern Europe from occupation by the Axis Powers, and helped in the capture of Germany's capital, Berlin.