The nature of encounter operations required of the commanders limitless initiative and constant readiness to take the responsibility for military actions.

Georgy Zhukov
If the nation only knew their hands dripped with innocent blood, it would have met them not with applause but with stones.

Georgy Zhukov
There are things in Russia which are not as they seem.

Georgy Zhukov
Nazis did not expect Soviet resistance to be so strong. The deeper they moved into this country's territory, the more fierce it became. When Hitler's armies approached Moscow, every man and woman here thought it imperative to resist the enemy. And that resistance grew by the day. The enemy was sustaining heavy losses, one after another. In fact, Hitler's best troops perished here. Nazis believed the Red Army was not capable of defending Moscow, but their schemes failed.

Georgy Zhukov
The mere existence of atomic weapons implies the possibility of their use.

Georgy Zhukov
If we come to a minefield, our infantry attacks exactly as it were not there.

Georgy Zhukov
If they [the Germans] attack, we will defend. If they do not attack until winter comes, then we will and will tear them to shreds!

Georgy Zhukov
The longer the battle lasts the more force we'll have to use!

Georgy Zhukov
And now German generals find it hard to explain away their retreat.

Georgy Zhukov
Here they found real war, but they were not ready for it. They were used to easy victories. This deprived them of flexibility on the one hand, of tenacity on the other. For them, war was merely maneuvers. They have neither cavalry nor skiers, their tanks cannot pass over the snow.

Georgy Zhukov
Winning depended to a large extent on the determination of the troops and the officers. The certainty that we were going to win kept up everyone's spirits, from privates to generals.

Georgy Zhukov
If you feel that the Chief of the General Staff talks only rubbish, my place is not here. Better to give me a command at the front where I can be of better use!

Georgy Zhukov
We will do all we can to insure peace... but if war is imposed upon us we will be together shoulder to shoulder as in the last war to strive for the happiness of mankind.

Georgy Zhukov
It is a fact that under equal conditions, large-scale battles and whole wars are won by troops which have a strong will for victory, clear goals before them, high moral standards, and devotion to the banner under which they go into battle.

Georgy Zhukov
Generalissimo Stalin directed every move... made every decision... He is the greatest and wisest military genius who ever lived... 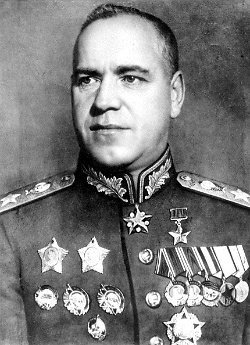 Creative Commons
Born: December 1, 1896
Died: June 18, 1974 (aged 77)
Bio: Georgy Konstantinovich Zhukov was a career officer in the Red Army of the Soviet Union, who became Chief of General Staff, Deputy Commander-in-Chief, Minister of Defence and member of Politburo.
Known for: