As the component parts of all new machines may be said to be old[,] it is a nice discriminating judgment, which discovers that a particular arrangement will produce a new and desired effect.... Therefore, the mechanic should sit down among levers, screws, wedges, wheels, etc. like a poet among the letters of the alphabet, considering them as the exhibition of his thoughts; in which a new arrangement transmits a new idea to the world.

Robert Fulton
The fear of meeting the opposition of envy, or the illiberality of ignorance is, no doubt, the frequent cause of preventing many ingenious men from ushering opinions into the world which deviate from common practice. Hence for want of energy, the young idea is shackled with timidity and a useful thought is buried in the impenetrable gloom of eternal oblivion. 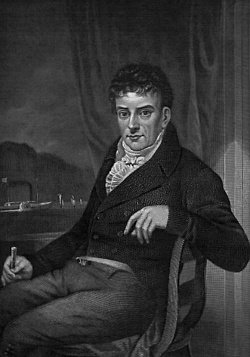