Historically, Garton Ash belongs to the last levy of the Cold War, a cohort fired by an uncomplicated anti-Communism. His staunchness made him a natural candidate for recruitment to MI6, which propositioned him early on, as it had Ascherson in his time.

Perry Anderson
Self-satisfaction is scarcely unfamiliar in Europe. But the contemporary mood is something different: an apparently illimitable narcissism, in which the reflection in the water transfigures the future of the planet into the image of the beholder. What explains this degree of political vanity? Obviously, the landscape of the continent has altered in recent years, and its role in the world has grown. Real changes can give rise to surreal dreams, but they need to be calibrated properly, to see what the connections or lack of them might be.

Perry Anderson
Polemical zeal can produce an fixation on the other side, or sides, of purely hostile intent.

Perry Anderson
The most advanced socialist thought in England is Raymond Williams' superbly intricate and persuasive work... Any English Marxism will have to measure itself against this landmark in our social thought.

Perry Anderson
By generation, three were virtually exact contemporaries — Strauss (1899-1973), Hayek (1899-1991), Oakeshott (1901-1990). Older by a decade, Schmitt (1888-1985) overlapped with them, They came from different disciplines — economics (Hayek), law (Schmitt), philosophy (Strauss) and history (Oakeshott) — but politics drew their concerns into a common field. There, they were divided by marked contrasts of character and outlook, and by the respective situations they confronted. The interweaving of themes and outcomes, across such differences, is all the more striking.

Perry Anderson
Garton Ash immersed himself much more deeply and single-mindedly than Ascherson in the politics of Eastern Europe during the final years of the Cold War. The period may have something to do with the difference. As the Eighties unfolded, the East European oppositions to Communism were steadily drawn into the magnetic field of the West's dominant ideology – the uncompromising doctrines of the Right proclaimed by Reagan and Thatcher. For Garton Ash, then an editor and contributor at the Spectator, this was a natural and desirable evolution. For Ascherson, no friend of Thatcherism, it must have posed more difficulties.

Perry Anderson
The classical legacies of political thought, from Plato to Nietzsche, and the immediate tasks of running the world, at home and abroad, have been of most concern to the Right. Normative philosophical constructions have become a specialty of the Centre. Economic, social and cultural investigations – of past and present – dominate the output of the Left. Any attempt to come to grips with all three outlooks is thus obliged to traverse quite variegated ground.

Perry Anderson
Nothing like this has been attempted before. (...) It might be called a literary Porto Alegre. That implies a beginning, with much fierce argument and discussion to come. But whatever the outcome of ensuing criticisms or objections, The World Republic of Letters — empire more than republic, as Casanova shows — is likely to have the same sort of liberating impact at large as Said's Orientalism, with which it stands comparison.

Perry Anderson
Politics is not a self-enclosed activity, organically generating a body of concepts internal to it.

Perry Anderson
Values – ethical, epistemological, aesthetic – figure in the contests over the field, but they do not define it. Intellectuals are judged not by their morals, but by the quality of their ideas, which are rarely reducible to simple verdicts of truth or falsity, if only because banalities are by definition accurate. 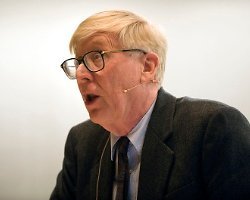 Born: September 1, 1938 (age 83)
Bio: Perry R. Anderson is a British historian and political essayist. A specialist in intellectual history, he is often identified with the post-1956 Western Marxism of the New Left.
Known for: