Louis Althusser
You know what Lenin says about 'intellectuals'. Individually certain of them may (politically) be declared revolutionaries, and courageous ones. But as a mass, they remain 'incorrigibly' petty-bourgeois in ideology.

Louis Althusser
Relations of production are first reproduced by the materiality of the processes of production and circulation. But it should not be forgotten that ideological relations are immediately present in these same processes.

Louis Althusser
Without claiming to be exhaustive, I maintain that every philosophy reproduces within itself, in one way or another, the conflict in which it finds itself compromised and caught up in the outside world.

Louis Althusser
Ideology represents the imaginary relationship of individuals to their real conditions of existence.

Louis Althusser
To become 'ideologists of the working class' (Lenin), 'organic intellectuals' of the proletariat (Gramsci), intellectuals have to carry out a radical revolution in their ideas: a long, painful and difficult re-education. An endless external and internal struggle.

Louis Althusser
Like every 'intellectual', a philosophy teacher is a petty bourgeois. When he opens his mouth, it is petty-bourgeois ideology that speaks: its resources and ruses are infinite.

Louis Althusser
Philosophy is, in the last instance, class struggle in the field of theory.

Louis Althusser
What art makes us see, and therefore gives to us in the form of 'seeing', 'perceiving' and 'feeling' (which is not the form of knowing,) is the ideology from which it is born, in which it bathes, from which it detaches itself as art, and which it alludes.

Louis Althusser
In the battle that is philosophy all the techniques of war, including looting and camouflage, are permissible.

Louis Althusser
Occasionally, the whole class struggle may be summed up in the struggle for one word against another word. Certain words struggle amongst themselves as enemies. Other words are the site of an ambiguity: the stake in a decisive but undecided battle 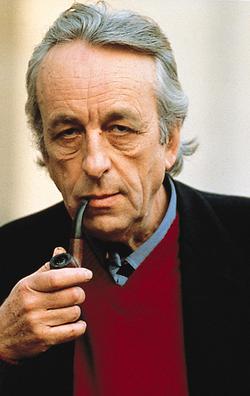 Wikipedia
Born: October 16, 1918
Died: October 22, 1990 (aged 72)
Bio: Louis Pierre Althusser was a French Marxist philosopher. He was born in Algeria and studied at the École Normale Supérieure in Paris, where he eventually became Professor of Philosophy.
Known for: