Movies are about people who do things. The number one fantasy of the cinema is that we can do something – we are relatively impotent in our own lives so we go to movies to watch people who are in control of their lives.

Paul Schrader
Saving someone's life is like falling in love, the best drug in the world. You wonder if you've become immortal. It's as if God has passed through you. Why deny it? God was you.

Paul Schrader
Someday a real rain will come and wash all this scum off the streets.

Paul Schrader
I could be just a writer very easily. I am not a writer. I am a screenwriter, which is half a film-maker... But it is not an art form, because screenplays are not works of art. They are invitations to others to collaborate on a work of art.

Ethnic life in the United States has become a sort of contest like baseball in which the blacks are always the Chicago Cubs.
Ishmael Reed 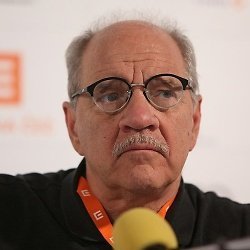