The Queen must surely be proud of such herioc men as the Police and Irish soldiers as It takes eight or eleven of the biggest mud crushers in Melbourne to take one poor little half starved larrakin to a watch house. I have seen as many as eleven, big & ugly enough to lift Mount Macedon out of a crab hole more like the species of a baboon or Guerilla than a man.

Ned Kelly
Let the hand of the law strike me down if it will, but I ask that my story be heard and considered.

Ned Kelly
It appeared [based on the evidence given] that I deliberately took up arms, of my own accord, and induced the other three to join me, for the purpose of doing nothing but shooting down the police.

Ned Kelly
You are committing a manifest injustice in imprisoning so many innocent people, just because they are supposed to be friendly to us. There is not the least foundation for the charge of aiding and abetting us against any of them, and you may know this is correct, or we would not be obtaining our food as usual, since they have been arrested.

Ned Kelly
Had I robbed, plundered, ravished and murdered everything I met my character could not be painted blacker than it as present, thank God my conscience is as clear as the snow in Peru.

Ned Kelly
That charge [stealing over 200 horses] has never been proved against me, and it is held in English law that a man is innocent until proven guilty.

Ned Kelly
I would have scattered their blood and brains like rain I would manure the Eleven Mile with their bloated carcasses and yet remember there is not one drop of murderous blood in my Veins.

Ned Kelly
... a day will come, at a bigger Court than this, when we shall see which is right and which is wrong. No matter how long a man lives he is bound to come to judgement somewhere, and as well here as anywhere.

Ned Kelly
If my life teaches the public that men are made mad by bad treatment, and if the police are taught that they may not exasperate to madness men they persecute and illtreat, my life will not be entirely thrown away.

Ned Kelly
I threw big cowardly Hall on his belly I straddled him and rooted both spurs onto his thighs he roared like a big calf attacked by dogs... I used to trip him and let him take a mouth ful of dust now and again as he was as helpless as a big guano after leaving a dead bullock or a horse.

Ned Kelly
I will go a little further than that, and say I will see you there when I go.

Ned Kelly
Circumstances have forced us to become what we are—outcasts and outlaws—and bad as we are, we are not so bad as we are supposed to be.

Ned Kelly
Last Words:
Ah well, I suppose it has come to this! … Such is life!

Ned Kelly
Are all my brothers and sisters, and my mother, not to be pitied also, who have no alternative but to put up with the brutal and cowardly conduct of a parcel of big ugly fat-necked wombat headed, big bellied, magpie legged, narrow hipped, splay-footed sons of Irish bailiffs or English landlords, known as 'officers of justice' or 'Victorian Police' who some call honest gentlemen but I would like to know what business an honest man would have in the Police as it is an old saying it takes a rogue to catch a rogue.

Ned Kelly
Fitzpatrick shall be the cause of greater slaughter to the rising generation than St. Patrick was to the snakes and toads of Ireland.

Ned Kelly
More men than I have put men to death, but I am the last man in the world that would take a man's life. Two years ago—even if my own life was at stake—and I am confident, if I thought a man would shoot me—I would give him a chance of keeping his life, and would part with my own; but if I knew that through him innocent persons' lives were at stake, I certainly would have to shoot him if he forced me to do so; but I would want to know that he was really going to take my innocent life.

Ned Kelly
My mind is as easy as the mind of any man in this world, as I am prepared to show before God and man.

Ned Kelly
The Police got great credit and praise in the papers for arresting the mother of 12 children one an infant on her breast and those two quiet hard working innocent men who would not know the difference a revolver and a saucepan handle and kept them six months awaiting trial and then convicted them on the evidence of the meanest article that ever the sun shone on it.

Ned Kelly
Neglect this and abide by the consequences, which shall be worse than the rust in the wheat of Victoria or the druth of a dry season to the grasshoppers in New South Wales I do not wish to give the order full force without giving timely warning, but I am a Widow's Son, outlawed and my orders must be obeyed.

Ned Kelly
The public could not do any more than take firearms and assisting the police as they have done, but by the light that shines pegged on an ant-bed with their bellies opened their fat taken out rendered and poured down their throat boiling hot will be fool to what pleasure I will give some of them and any person aiding or harbouring or assisting the Police...

Ned Kelly
I warn you that within a week we will leave your Colony, but we will not leave it until we have made the country ring with the name of Kelly and taken terrible revenge for the injustice and oppression we have been subjected to. Beware, for we are now desperate men.

Ned Kelly
I do not pretend that I have led a blameless life, or that one fault justifies another, but the public in judging a case like mine should remember that the darkest life may have a bright side, and that after the worst has been said against a man, he may, if he is heard, tell a story in his own rough way that will perhaps lead them to intimate the harshness of their thoughts against him, and find as many excuses for his as he would plead for himself.

Ned Kelly
I could not suffer them blowing me to pieces in my own native land and they knew Fitzpatrick wronged us and why not make it public and convict him but no they would rather riddle poor unfortunate creoles.

Ned Kelly
It will pay Government to give those people who are suffering innocence, justice and liberty. if not I will be compelled to show some colonial stratagem which will open the eyes of not only the Victoria Police and inhabitants but also the whole British army and no doubt they will acknowledge their hounds were barking at the wrong stump.

Ned Kelly
I wish to acquaint you with some of the occurrences of the present past and future. 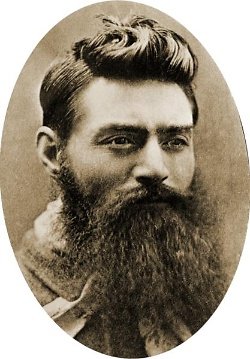 Creative Commons
Born: June 3, 1855
Died: November 11, 1880 (aged 25)
Bio: Edward "Ned" Kelly was an Australian bushranger of Irish descent. He was born in the British colony of Victoria as the third of eight children to an Irish convict from County Tipperary and an Australian mother with Irish parentage.
Known for:
Most used words:
man, police, life, innocent, big, poor, public, bad, eleven, wrong