Eratosthenes, the mapmaker who was the first man to accurately measure the size of the Earth, was a librarian.

Ken Jennings
I always feel a certain sense of reverence in libraries, even small city ones that smell like homeless internet users.

Ken Jennings
There must be something innate about maps, about this one specific way of picturing our world and our relation to it, that charms us, calls to us, won't let us look anywhere else in the room if there's a map on the wall.

Ken Jennings
Arthur Jay Klinghoffer, a professor of political science at Rutgers University, has argued that geography seems less relevant than ever in a world where nonstate actors -- malleable entities like ethnicities, for example -- are as powerful and important as the ones with governments and borders. Where on a map can you point to al-Qaeda? Or Google, or Wal-Mart? Everywhere and nowhere.

Men at forty Learn to close softly The doors to rooms they will not be Coming back to.
Donald Justice 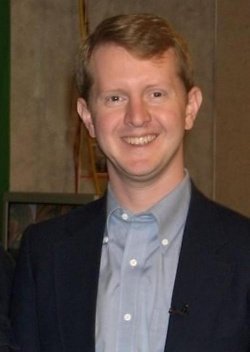 Creative Commons
Born: May 23, 1974 (age 46)
Bio: Kenneth Wayne "Ken" Jennings III is an American game show contestant and author. Jennings holds the record for the longest winning streak on the U.S. syndicated game show Jeopardy! and as being the second highest-earning contestant in game show history.
Known for: