I think we shall have to make a real search for the neutron.

James Chadwick
The study of the radioactive elements is in some respects far more important than the study of the ordinary stable elements, for the phenomena observed lead at once to the necessity of an atomic structure of matter and supply convincing proof of the individual existence of atoms.

James Chadwick
A radioactive substance may be defined as one which possesses the property of emitting spontaneously radiations capable of passing through sheets of metal and other substances opaque to light.

James Chadwick
The radioactive processes thus reveal an enormous store of energy resident in the atoms. No indications of this had been observed previously, because the chemical and physical forces at our disposal were not sufficient to cause atoms to break up into simpler forms.

James Chadwick
It has been seen that the study of radioactivity has provided direct evidence of the existence of the atom as a unit in the structure of matter.

James Chadwick
The radioactive processes are spontaneous and uncontrollable, and are entirely unaffected by physical and chemical agencies.

James Chadwick
On the discovery of the neutron:
Much interesting and important work was done, but it was work of consolidation rather than of discovery; in spite of many attempts the paths to new fields could not be found.

James Chadwick
[Rutherford] was a little disappointed, because it was so very difficult to find out anything really important.

James Chadwick
Since the atom, as a whole, is neutral, there must be a positive charge associated with the atom equal in amount to the sum of the negative charges. The electrical forces between the positive and negative charges preserve the equilibrium of the atom. 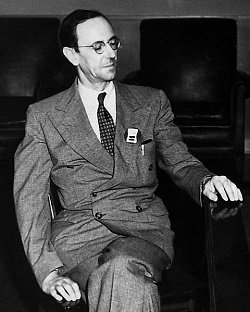 Creative Commons
Born: October 20, 1891
Died: July 24, 1974 (aged 82)
Bio: Sir James Chadwick was an English physicist who was awarded the 1935 Nobel Prize in Physics for his discovery of the neutron in 1932. In 1941, he wrote the final draft of the MAUD Report, which inspired the U.S. government to begin serious atomic bomb research efforts.