If you will not kill me, I will live with you.
Said to Native Americans
James Beckwourth
You are all fools and old women; come with me, if any of you are brave enough, and I will show you how to fight.

James Beckwourth
The restless, youthful mind, that wearies with the monotony of peaceful everyday existence, and aspires after a career of wild adventure and thrilling romance, will find by my experience that such a life is by no means one of comfort, and that the excitement which it affords is very dearly purchased by the opportunities lost of gaining far more profitable wisdom.

James Beckwourth
Whatever is their fortune, good or bad, the leader is the person on whom the praise or blame falls. 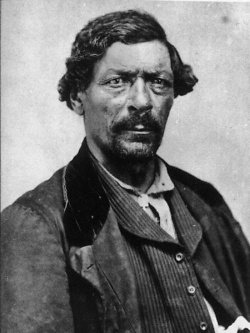 Creative Commons
Born: April 26, 1798
Died: October 29, 1866 (aged 68)
Bio: James Pierson Beckwourth, born James Beckwith and generally known as, Jim Beckwourth was an American mountain man, fur trader, and explorer. A mulatto born into slavery in Virginia, he was freed by his father and apprenticed to a blacksmith; later he moved to the American West.