I confess indebtedness to Adventists as well as to other denominations.

Charles Taze Russell
The present is a time of testing, we believe, to many of the Lord's people. Have we in the past been active merely because we hoped for our glorious change in A. D. 1914, or have we been active because of love and loyalty to the Lord and his message and the brethren!

Charles Taze Russell
A truth presented by Satan himself is just as true as a truth stated by God.

Charles Taze Russell
Our own views are not prophecy, but interpretations of the holy prophets of old.

Charles Taze Russell
The deliverance of the saints must take place some time before 1914.

Charles Taze Russell
Brought up a Presbyterian, indoctrinated from the Catechism, and being naturally of an inquiring mind, I fell a ready prey to the logic of infidelity, as soon as I began to think for myself. But that which at first threatened to be the utter shipwreck of faith in God and the Bible was, under God's providence, over-ruled for good, and merely wrecked my confidence in human creed and systems of Bible misinterpretations.

Charles Taze Russell
In view of this strong Bible evidence concerning the Times of the Gentiles, we consider it an established truth that the final end of the kingdoms of this world, and the full establishment of the kingdom of God, will be accomplished by the end of A.D. 1914. 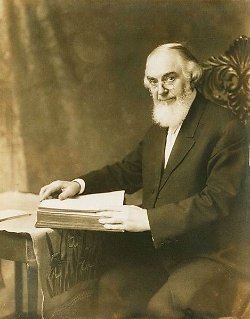