Benazir Bhutto
Pakistan is heir to an intellectual tradition of which the illustrious exponent was the poet and philosopher Mohammad Iqbal. He saw the future course for Islamic societies in a synthesis between adherence to the faith and adjustment to the modern age.

Benazir Bhutto
In distinguishing between Islamic teachings and social taboos, we must remember that Islam forbids injustice; Injustice against people, against nations, against women. It shuns race, color, and gender as a basis of distinction amongst fellowmen. It enshrines piety as the sole criteria for judging humankind.

Benazir Bhutto
Democracy needs support, and the best support for democracy comes from other democracies.

Benazir Bhutto
We learned at an early age that it was men's interpretation of our religion that restricted women's opportunities, not our religion itself. Islam in fact had been quite progressive toward women from its inception...

Benazir Bhutto
You can't be fuelled by bitterness. It can eat you up, but it cannot drive you.

Benazir Bhutto
Oppression does not know the meaning of provincial boundaries. Aren't our energies better spent fighting the common enemy instead of each other?

Benazir Bhutto
What is important is that a political party articulates the mood of a generation.

Benazir Bhutto
Like all children I had taken my father for granted. Now that I had lost him, I felt an emptiness that could never be filled. But I did not let myself cry, believing as a Muslim that tears pull a spirit earthward and won't let it be free.

Benazir Bhutto
Every dictator uses religion as a prop to keep himself in power.

Benazir Bhutto
The Holy Book calls upon Muslims to resist tyranny. Dictatorships in Pakistan, however long, have, therefore, always collapsed in the face of this spirit. 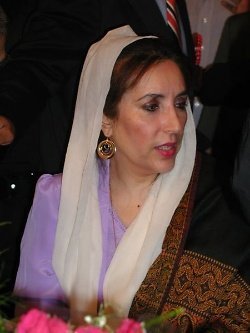 Creative Commons
Born: June 21, 1953
Died: December 27, 2007 (aged 54)
Bio: Benazir Bhutto was the 11th Prime Minister of Pakistan and the leader of the centre-left Pakistan Peoples Party. She was the first woman to head a Muslim majority nation, and the only one to head it twice.
Known for: