May Heaven be propitious, and smile on the cause of my country.

Zebulon Pike
Should I be the happy mortal destined to turn the scale of war, will you not rejoice, O my father?

Zebulon Pike
If success attends my steps, honor and glory await my name-if defeat, still shall it be said we died like brave men, and conferred honor, even in death, on the American Name.

Zebulon Pike
Your former Fathers the Spaniards have now no further Authority over you.

Zebulon Pike
I cannot consent to be led three or four hundred leagues out of my route, without its being by force of arms.

Zebulon Pike
It was the wish of the Americans that their red brethren should remain peacefully round their own fires, and not embroil themselves in any disputes between the white people. 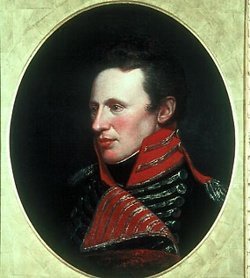 Creative Commons
Born: January 5, 1779
Died: April 27, 1813 (aged 34)
Bio: Zebulon Montgomery Pike was an American brigadier general and explorer for whom Pikes Peak in Colorado was renamed. As a U.S.
Known for: