Cruelty to dumb animals is one of the distinguishing vices of low and base minds. Wherever it is found, it is a certain mark of ignorance and meanness; a mark which all the external advantages of wealth, splendour, and nobility, cannot obliterate. It is consistent neither with learning nor true civility.

William Jones
Go boldly forth, my simple lay,
Whose accents flow with artless ease,
Like orient pearls at random strung.


William Jones
There is no part of mathematical science more truly calculated to interest and surprize mankind, than the measurement of the relative positions and distances of inaccessible objects.

William Jones
An experiment in nature, like a text in the Bible, is capable of different interpretations, according to the preconceptions of the interpreter.

William Jones
Seven hours to law, to soothing slumber seven,
Ten to the world allot, and all to heaven.

William Jones
My opinion is, that power should always be distrusted, in whatever hands it is placed.

William Jones
Voices of the glorified urge us onward. They who have passed from the semblances of time to the realities of eternity call upon us to advance. The rest that awaits us invites us forward. We do not pine for our rest before God wills it. We long for no inglorious rest. We are thankful rather for the invaluable training of difficulty, the loving discipline of danger and strife. Yet in the midst of it all the prospect of rest invites us heavenward. Through all, and above all, God cries, " Go forward!" " Come up higher!"

William Jones
The only road to the highest stations in this country is that of the law.

William Jones
Than all Bocara's vaunted gold,
Than all the gems of Samarcand.

William Jones
Wherever we direct our attention to Hindu literature the notion of infinity presents itself.

William Jones
I have carefully and regularly perused the Holy Scriptures, and am of opinion that the volume contains more sublimity, purer morality, more important history, and finer strains of eloquence, than can be collected from all other books, in whatever language they may have been written. 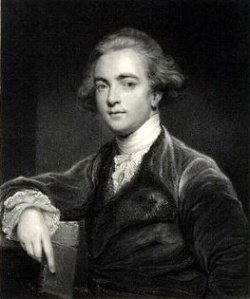 Creative Commons
Born: September 28, 1746
Died: April 27, 1794 (aged 47)
Bio: Sir William Jones was an Anglo-Welsh philologist, and a scholar of ancient India, particularly known for his proposition of the existence of a relationship among European and Indian languages, which would later be known as Indo-European languages.
Known for: