In 1891, during the Presidency of William Henry Harrison [Benjamin Harrison], electric lights were first installed in the White House, the residence of the leaders of our country. At that time, commercial electricity was not economically feasible, but President Harrison wanted to affirm his confidence in the technological capability of our country.

Jimmy Carter
James Buchanan made a great statement on behalf of the right of revolution. Grant restored the gold standard. Harding denounced US imperialism in Haiti. But overall, my favorite president is William Henry Harrison. He keeled over shortly after his inauguration.

Lew Rockwell
The rise of democracy as an effective force in the nation came in with western preponderance under Jackson and William Henry Harrison, and it meant the triumph of the frontier—with all of its good and all of its evil elements.

Frederick Jackson Turner
No one has died from giving a bad presentation. Well, at least one person did, President William Henry Harrison, but he developed pneumonia after giving the longest inaugural address in U.S. history. The easy lesson from his story: keep it short, or you might die. 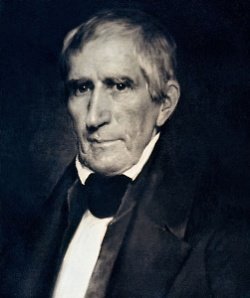