Light, properly so called, is only a narrowly defined part of a far greater phenomenon, that of radiation in general.... The lengths of [visible] light waves fall between close limits; but the rules of wave motion apply to the infinitesimal waves of X-rays on one hand and to the long radio waves on the other.

William Henry Bragg
The dividing line between the wave or particle nature of matter and radiation is the moment 'Now' As this moment steadily advances through time it coagulates a wavy future into a particle past.

William Henry Bragg
On Mondays, Wednesdays, and Fridays we use the wave theory; on Tuesdays, Thursdays, and Saturdays we think in streams of flying energy quanta or corpuscles. 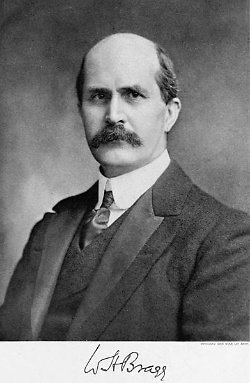