I conceive, therefore, that when we say the atomic weight of, for instance, calcium is 40, we really express the fact that, while the majority of calcium atoms have an actual atomic weight of 40, there are not a few which are represented by 39 or 41, a less number by 38 or 42, and so on.

William Crookes
In old Egyptian days a well known inscription was carved over the portal of the temple of Isis: "I am whatever hath been, is, or ever will be; and my veil no man hath yet lifted." Not thus do modern seekers after truth confront nature — the word that stands for the baffling mysteries of the universe. Steadily, unflinchingly, we strive to pierce the inmost heart of Nature, from what she is to reconstruct what she has been, and to prophesy what she yet shall be. Veil after veil we have lifted, and her face grows more beautiful, august, and wonderful with every barrier that is withdrawn.

William Crookes
The fixation of nitrogen is vital to the progress of civilized humanity, and unless we can class it among the certainties to come, the great Caucasian race will cease to be the foremost in the world, and will be squeezed out by the races to whom wheaten bread is not the staff of life.

William Crookes
I see no good reason why any man of scientific mind should shut his eyes to our work or deliberately stand aloof from it. Our Proceedings are, of course, not exactly parallel to the Proceedings of a society dealing with a long-established branch of science. In every form of research there must be a beginning. We own to much that is tentative, much that may turn out erroneous. But it is thus, and thus only, that each science in turn takes its stand. I venture to assert that both in actual careful record of new and important facts, and in suggestiveness, our society's work and publications will form no unworthy preface to a profounder science both of man, of nature, and of "worlds not realized" than this planet has yet known.

William Crookes
I am not disposed to bewail the limitations imposed by human ignorance. On the contrary, I feel ignorance is a healthful stimulant; and my enforced conviction that neither I nor anyone can possibly lay down beforehand what does not exist in the universe, or even what is not going on all round us everyday of our lives, leaves me with a cheerful hope that something very new and very arresting may turn up anywhere at any minute. … I shall try to utilize this temper of mind today by clearing away, so far as I can, certain presuppositions, on one side or on the other, which seem to me to depend upon a too hasty assumption that we know more about the universe than as yet we really can know.

William Crookes
An omnipotent being could rule the course of this world in such a way that none of us should discover the hidden springs of action. He need not make the sun stand still upon Gibeon. He could do all that he wanted by the expenditure of infinitesimal diverting force upon ultra-microscopic modifications of the human germ.

William Crookes
The phenomena in these exhausted tubes reveal to physical science a new world-a world where matter may exist in a fourth state, where the corpuscular theory of light may be true, and where light does not always move in straight lines, but where we can never enter, and with which we must be content to observe and experiment from the outside.

William Crookes
It can scarcely be denied that the fundamental phenomena which first led mankind into chemical inquiries are those of combustion.

William Crookes
It is the chemist who must come to the rescue of the threatened communities. It is through the laboratory that starvation may ultimately be turned to plenty.

William Crookes
The spectroscope reveals that the elementary components of the stars and the earth are pretty much the same.

William Crookes
All the phenomena of the universe are presumably in some way continuous, and it is unscientific to call in the aid of mysterious agencies when, with every fresh advance in knowledge, it is shown that ether vibrations have powers and attributes abundantly equal to any demand — even to the transmission of thought.

William Crookes
Chemists do not usually stutter. It would be very awkward if they did, seeing that they have at times to get out such words as methylethylamylophenylium.

William Crookes
The task I am called upon to perform today is to my thinking by no means a merely formal or easy matter. It fills me with deep concern to give an address, with such authority as a president's chair confers, upon a science which, though still in a purely nascent stage, seems to me at least as important as any other science whatever. Psychical science, as we here try to pursue it, is the embryo of something which in time may dominate the whole world of thought. This possibility — nay, probability — does not make it the easier to me now. Embryonic development is apt to be both rapid and interesting; yet the Prudent man shrinks from dogmatizing on the egg until he has seen the chicken.

William Crookes
The production of motion, molar or molecular, is governed by physical laws, which it is the business of the philosopher to find out and correlate. The law of the conservation of energy overrides all laws, and it is a preeminent canon of scientific belief that for every act done a corresponding expenditure of energy must be transformed.
No work can be effected without using up a corresponding value in energy of another kind. But to us the other side of the problem is even of more importance. Granted the existence of a certain kind of molecular motion, what is it that determines its direction along one path rather than another?

William Crookes
Which was first, Matter or Force? If we think on this question, we shall find that we are unable to conceive of matter without force, or force without matter. When God created the elements of which the earth is composed, He created certain wondrous forces, which are set free and become evident when matter acts on matter.

William Crookes
We are on the track and are not daunted, and fain would we enter the mysterious region which ignorance tickets 'Unknown.'

William Crookes
To discover a new element is a very fine thing but if you could decompose an element and tell us what it is made of — that would be a discovery indeed worth making.

William Crookes
The rare earth elements perplex us in our researches, baffle us in our speculations, and haunt us in our very dreams. They stretch like an unknown sea before us mocking, mystifying and murmuring strange revelations and possibilities.

William Crookes
I will point out a curious, inveterate, and widespread illusion — the illusion that our earthly bodies are a kind of norm of humanity, so that ethereal bodies, if such there be, must correspond to them in shape and size.
When we take a physical view of a human being in his highest form of development, he is seen to consist essentially of a thinking brain, the brain itself, among its manifold functions, being a transformer whereby intelligent will power is enabled to react on matter. To communicate with the external world, the brain requires organs by which it can be transported from place to place, and other organs by means of which energy is supplied to replace that expended in the exercise of its own special functions.

William Crookes
It is curious that the popular conceptions of evil and malignant beings are of the type that would be produced by increased gravitation — toads, reptiles, and noisome creeping things — while the arch fiend himself is represented as perhaps the ultimate form which could be assumed by a thinking brain and its necessary machinery were the power of gravitation to be increased to the highest point compatible with existence — a serpent crawling along the ground. On the other hand, our highest types of beauty are those which would be common under decreased gravitation.
The "daughter of the gods, divinely tall," and the leaping athlete, please us by the slight triumph over the earthward pull which their stature or spring implies.

William Crookes
I think, without exception, the diamond is the most sensitive substance I have yet met for ready and brilliant phosphorescence.

William Crookes
I am impelled to one further reflection, dealing with the conservation of energy. We say, with truth, that energy is transformed but not destroyed, and that whenever we can trace the transformation we find it quantitatively exact. So far as our very rough exactness goes, this is true for inorganic matter and for mechanical forces. But it is only inferentially true for organized matter and for vital forces. We can not express life in terms of heat or of motion. And thus it happens that just when the exact transformation of energy will be most interesting to watch, we can not really tell whether any fresh energy has been introduced into the system or not. Let us consider this a little more closely. 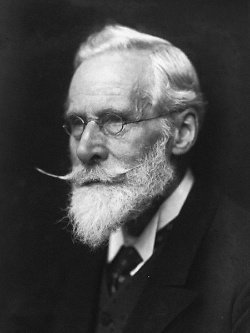 Creative Commons
Born: June 17, 1832
Died: April 4, 1919 (aged 86)
Bio: Sir William Crookes was an English chemist and physicist who attended the Royal College of Chemistry, London, and worked on spectroscopy. He was a pioneer of vacuum tubes, inventing the Crookes tube which was made in 1875.
Known for: