One blow from the German army and another from the Soviet army put an end to this ugly product of Versailles.

Vyacheslav Molotov
The fact that atomic war may break out, isn't that class struggle? There is no alternative to class struggle. This is a very serious question. The be-all and end-all is not peaceful coexistence. After all, we have been holding on for some time, and under Stalin we held on to the point where the imperialists felt able to demand point-blank: either surrender such and such positions, or it means war. So far the imperialists haven't renounced that

Vyacheslav Molotov
Germany, which has lately united 80 million Germans, has submitted certain neighboring countries to her supremacy and gained military strength in many aspects, and thus has become, as clearly can be seen, a dangerous rival to principal imperialistic powers in Europe — England and France. That is why they declared war on Germany on a pretext of fulfilling the obligations given to Poland. It is now clearer than ever, how remote the real aims of the cabinets in these countries were from the interests of defending the now disintegrated Poland or Czechoslovakia.

Vyacheslav Molotov
The trouble with free elections is that you never know how they are going to turn out.

Vyacheslav Molotov
Someone helped us a lot with the atomic bomb. The intelligence (service) played a huge role. These Rosenbergs suffered in America. It is not excluded that they helped us. But we shouldn't really speak about it, because we might receive this kind of help in the future.

Vyacheslav Molotov
Our scientists all the more occupy advanced positions in the development of world science. By the example of their successes in the field of atomic energy, our scientists and technicians have vividly shown how much the increased might of the Soviet state and the further growth of its international authority depends on their efforts and practical successes.

Vyacheslav Molotov
We cannot lose Poland. If this line is crossed, they will grab us, too.

Vyacheslav Molotov
Who can think that this eviction of Germans was undertaken only as a temporary experiment? Those who adopted the decision on the eviction of the Germans from these territories, and who understood that Poles from other Polish districts would at once move into these territories, cannot suggest after a while to carry out reverse measures. The very idea of involving millions of people in such experiments is unbelievable, quite apart from the cruelty of it, both towards the Poles and the Germans themselves.

Vyacheslav Molotov
As long as we live in a system of states, and as long as the roots of fascism and imperialist aggression have not finally been extirpated, our vigilance in regard to possible new violators of peace should not slacken, and concern for the strengthening of cooperation between the peace-loving powers will continue to be our most important duty.

Vyacheslav Molotov
Life has improved, and now as never before the doors to a happy and cultured life for all the peoples of our Union stand wide open. We are already enjoying the first fruits of our victory and we see that an unparalleled rise in the standard of living and culture of all the peoples of the Soviet Union awaits us. And in spite of all this, we have not yet seen the last of people who in their blind hatred of the new world are planning the seizure and dismemberment of the Soviet Union. Well, what shall we say to them? It is true that we appeared in the world without the permission of these gentlemen, and undoubtedly against their wishes.... This means that the time has come when the old world must make way for the new. 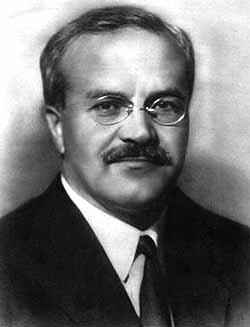 Creative Commons
Born: March 9, 1890
Died: November 8, 1986 (aged 96)
Bio: Vyacheslav Molotov was Soviet politician and diplomat, a leading figure in the Soviet government from the 1920s, when he rose to power as a protégé of Joseph Stalin, to the 1950s, when he was dismissed from office by Nikita Khrushchev. He was the principal Soviet signatory of the Nazi-Soviet non-aggression pact of 1939.
Known for: