The one excuse for being pagan is to enjoy it thoroughly.

Roy Campbell
The frost stings sweetly with a burning kiss
As intimate as love, as cold as death.

Roy Campbell
Or like a poet woo the Moon,
Riding an armchair for my steed,
And with a flashing pen harpoon
Terrific metaphors of speed.

Roy Campbell
South Africa, renowned both far and wide
For politics and little else beside.

Roy Campbell
Our spirits leaped, hosannas of destruction,
Like desert lilies forked with tongues of fire.

Roy Campbell
With white tails smoking free,
Long streaming manes, and arching necks, they show
Their kinship to their sisters of the sea –
And forward hurl their thunderbolts of snow.
Still out of hardships bred,
Spirits of power and beauty and delight
Have ever on such frugal pastures fed
And loved to course with tempests through the night.


Roy Campbell
The timeless, surly patience of the serf
That moves the nearest to the naked earth
And ploughs down palaces, and thrones, and towers.


Roy Campbell
I hate 'Humanity' and all such abstracts: but I love people. Lovers of 'Humanity' generally hate people and children, and keep parrots or puppy dogs.

Roy Campbell
Translations (like wives) are seldom strictly faithful if they are in the least attractive.

Roy Campbell
We shall not meet again: over the wave
Our ways divide, and yours is straight and endless –
But mine is short and crooked to the grave:
Yet what of these dark crowds, amid whose flow
I battle like a rock, aloof and friendless –
Are not their generations, vague and endless,
The waves, the strides, the feet on which I go?


Roy Campbell
You praise the firm restraint with which they write –
I'm with you there, of course:
They use the snaffle and the curb all right,
But where's the bloody horse?


Roy Campbell
I love to see, when leaves depart,
The clear anatomy arrive,
Winter, the paragon of art,
That kills all forms of life and feeling
Save what is pure and will survive.


Roy Campbell
Giraffes!—a People
Who live between the earth and skies,
Each in his lone religious steeple,
Keeping a lighthouse with his eyes.


Roy Campbell
Of all the clever people round me here
I most delight in Me –
Mine is the only voice I care to hear,
And mine the only face I like to see. 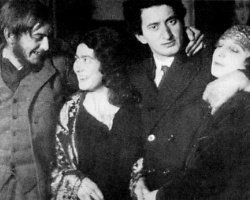 Creative Commons
Born: October 2, 1901
Died: April 23, 1957 (aged 55)
Bio: Ignatius Royston Dunnachie Campbell, better known as Roy Campbell, was a South African poet and satirist. He was considered by T. S. Eliot, Dylan Thomas and Edith Sitwell to have been one of the best poets of the period between the First and Second World Wars.