I've been giving a little gamble on the roulette and just sitting having a coffee with the fans, chatting away.

Ricky Hatton
I've got a problem with my legs, they just can't walk past a chippy.

Ricky Hatton
I have always really liked Tom Jones and I can't wait to see him in action. One thing is for sure, I would rather be singing for a living than getting punched on the head.

Ricky Hatton
Brock's a big bloke, isn't he? If you found him in bed with your girlfriend, you'd tuck him in!

Ricky Hatton
I've got a lot to prove because of the criticism over my weight and moving back down a division.

Ricky Hatton
There were lots of celebrities at my fight. I heard through the grapevine Michael Caine was one... and not a lot of people know that!

Ricky Hatton
Winning the IBF title was the greatest night of my life. To give it up outside the ring is truly painful.

Ricky Hatton
I was leaving the hotel to get to the fight when my phone went and someone said 'Hello Ricky, it's Tom'. I said 'Tom who?' and when he said 'Tom Jones' I told him to eff off! I thought it was a wind-up! 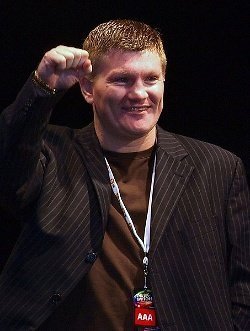