You got to set your mind right and the rest will come to you naturally. No restrictions, no hang-ups, no stupid rules, no formalities, no forbidden fruit - just everyone getting and giving as much as he and she can.

Ray Charles
My friends don't come around me
Because I've been so blind,
I can't even borrow a nickel
Now I've almost lost my mind.


Ray Charles
Women anchor me. They're there when I need them. They're sensitive to me, and I'm sensitive to them. I'm not saying I've loved that many women.

Ray Charles
My music had roots which I'd dug up from my own childhood, musical roots buried in the darkest soil.

Ray Charles
Love is a special word, and I use it only when I mean it. You say the word too much and it becomes cheap. 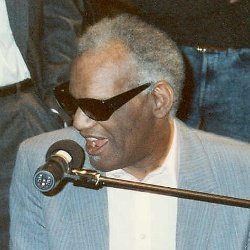