He is Father. Even more, God is Mother, who does not want to harm us.

Pope John Paul I
We wish to continue in following up the legacy of the Second Vatican Council whose wise regulations have still to be led to their fulfilment, being careful that a push, generous perhaps, but unduly timed, does not detract from the content and meaning of the council, and on the other hand being careful and reined and timid efforts do not slow up the magnificent drive of renewal and of life.

Pope John Paul I
It is not wrong to want to live better; what is wrong is a style of life which is presumed to be better when it is directed towards 'having' rather than 'being,' and which wants to have more, not in order to be more but in order to spend life in enjoyment as an end in itself.

Pope John Paul I
People sometimes say: "we are in a society that is all rotten, all dishonest." That is not true. There are still so many good people, so many honest people. Rather, what can be done to improve society? I would say: let each of us try to be good and to infect others with a goodness imbued with the meekness and love taught by Christ. Christ's golden rule was: "do not do to others what you do not want done to yourself. Do to others what you want done to yourself." 'And he always gave. Put on the cross, not only did he forgive those who crucified him, but he excused them. He said: "Father, forgive them for they know not what they do." This is Christianity, these are sentiments which, if put into practice would help society so much.

Pope John Paul I
In fact it is remarkable that this theory has had progressively greater influence on the spirit of researchers, following a series of discoveries in different scholarly disciplines. The convergence in the results of these independent studies—which was neither planned nor sought—constitutes in itself a significant argument in favor of the theory.

Pope John Paul I
Yesterday, a funny thing happened to me on my way to the Conclave.

Pope John Paul I
Remember: Christ is calling you; the Church needs you; the Pope believes in you and he expects great things of you.

Pope John Paul I
I am only a poor man, accustomed to small things and silence. 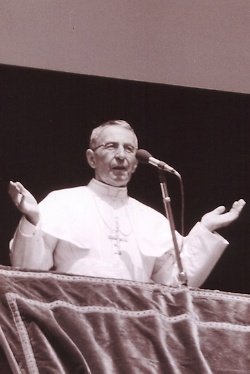