In order to turn natural history into a true science, one would have to devote oneself to investigations capable of telling us not the particular shape of such and such an animal, but the general procedures of nature in the animal's production and preservation.

Pierre Louis Maupertuis
To endeavor at discovering the connections that subsist in nature, is no way inconsistent with prudence; but it is downright folly to push these researches too far; as it is the lot only of superior Beings to see the dependence of events, from one end to the other, of the chain which supports them.

Pierre Louis Maupertuis
Kepler... thought it but reasonable, that as the sea has its whales and monsters, the air should have them likewise. These monsters are Comets... 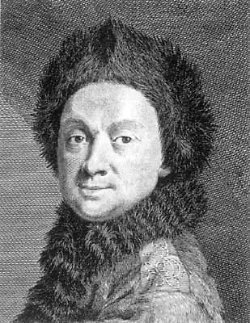 Creative Commons
Born: July 17, 1698
Died: July 27, 1759 (aged 61)
Bio: Pierre Louis Moreau de Maupertuis was a French mathematician, philosopher and man of letters. He became the Director of the Académie des Sciences, and the first President of the Prussian Academy of Science, at the invitation of Frederick the Great.