Time after time I have worked with actors who... are tragically incapable, however hard they try, of laying down for one brief instant even in rehearsal the image of themselves that has hardened round an inner emptiness.

Peter Brook
I am calling it the Holy Theatre for short, but it could be called The Theatre of the Invisible-Made-Visible: the notion that the stage is a place where the invisible can appear has a deep hold on our thoughts.

Peter Brook
In the theatre, every form once born is mortal; every form must be reconceived, and its new conception will bear the marks of all the influences that surround it.

Peter Brook
Many audiences all over the world will answer positively from their own experience that they have seen the face of the invisible through an experience on the stage that transcended their experience in life. They will maintain that Oedipus or Berenice or Hamlet or The Three Sisters performed with beauty and with love fires the spirit and gives them a reminder that daily drabness is not necessarily all.

Peter Brook
A word does not start as a word — it is an end product which begins as an impulse, stimulated by attitude and behavior which dictates the need for expression. This process occurs inside the dramatist; it is repeated inside the actor.

Peter Brook
I can take any empty space and call it a bare stage. A man walks across this empty space, whilst someone else is watching him, and this is all that is needed for an act of theatre to be engaged.

Peter Brook
Time, which is so often an enemy in life, can also become our ally if we see how a pale moment can lead to a glowing moment, and then turn to a moment of perfect transparency, before dropping again to a moment of everyday simplicity.

Peter Brook
Shakespeare doesn't belong to the past. If his material is valid, it is valid now. It's like coal. The only meaningfulness of a piece of coal starts and finishes with its combustion, giving us light and heat. And that to me is Shakespeare.

Peter Brook
The work of a director can be summed up in two very simple words. Why and How. 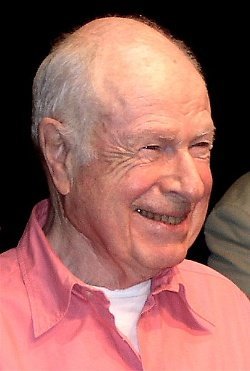 Creative Commons
Born: March 21, 1925 (age 96)
Bio: Peter Stephen Paul Brook is an English theatre and film director who has been based in France since the early 1970s. He has won multiple Tony and Emmy Awards, a Laurence Olivier Award, the Praemium Imperiale, and the Prix Italia.
Known for: