What the world really needs is more love and less paper work.

Pearl Bailey
There are two kinds of talent, man-make talent and God-given talent. With man-made talent you have to work very hard. With God-given talent, you just touch it up once in a while.

Pearl Bailey
Sometimes you think the whole world is falling, and it's only yourself that's leaning.

Pearl Bailey
Hungry people cannot be good at learning or producing anything, except perhaps violence.

Pearl Bailey
The fact is that it takes more than ingredients and technique to cook a good meal. A good cook puts something of himself into the preparation - he cooks with enjoyment, anticipation, spontaneity, and he is willing to experiment.

Pearl Bailey
How can you give a man a room in a house and not let him come through the front door?

Pearl Bailey
We look into mirrors but we only see the effects of our times on us - not our effects on others.

Pearl Bailey
Some of the biggest failures I ever had were successes.

Pearl Bailey
Sometimes I would almost rather have people take away years of my life than take away a moment.

Pearl Bailey
There's a period of life when we swallow a knowledge of ourselves, and it becomes either good or sour inside.

Pearl Bailey
I don't like to say that my kitchen is a religious place, but I would say that if I were a voodoo priestess, I would conduct my rituals there. 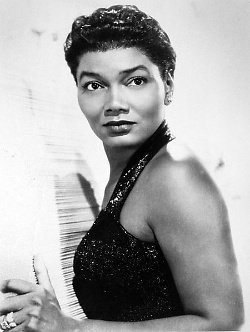 Creative Commons
Born: March 29, 1918
Died: August 17, 1990 (aged 72)
Bio: Pearl Mae Bailey was an American actress and singer. After appearing in vaudeville, she made her Broadway debut in St. Louis Woman in 1946. She won a Tony Award for the title role in the all-black production of Hello, Dolly! in 1968.
Known for: