Only truthful hands write true poems. I cannot see any basic difference between a handshake and a poem.

Paul Celan
German poetry is going in a very different direction from French poetry.... Its language has become more sober, more factual. It distrusts "beauty." It tries to be truthful.

Paul Celan
Illegibility of this world. All things twice over. The strong clocks justify the splitting hour, hoarsely. You, clamped into your deepest part, climb out of yourself for ever.

Paul Celan
A man lives in the house he plays with his vipers he writes
he writes when it grows dark to Deutschland your golden hair Margareta
Your ashen hair Shulamith we shovel a grave in the air there you won't lie too cramped.


Paul Celan
The heart hid still in the dark, hard as the Philosophers Stone.

Paul Celan
A little stallion gallops across the leafing fingers-
Black the gate leaps open, I sing;
How did we live here?


Paul Celan
Rush of pine scent (once upon a time), the unlicensed conviction there ought to be another way of saying this.

Paul Celan
He shouts play death more sweetly this Death is a master from Deutschland
he shouts scrape your strings darker you'll rise then as smoke to the sky
you'll have a grave then in the clouds there you won't lie too cramped.


Paul Celan
We stand by the window embracing, and people look up from the street:
it is time they knew!
It is time the stone made an effort to flower,
time unrest had a beating heart.
It is time it were time. It is time.

Paul Celan
With wine and being lost, with less and less of both: I rode through the snow, do you read me I rode God far—I rode God near, he sang, it was our last ride over the hurdled humans. They cowered when they heard us overhead, they wrote, they lied our neighing into one of their image-ridden languages.

Paul Celan
How you die out in me: down to the last worn-out knot of breath you're there, with a splinter of life.

Paul Celan
A nothing
we were, are, shall
remain, flowering:
the nothing--, the
no one's rose.


Paul Celan
Don't sign your name between worlds, surmount the manifold of meanings, trust the tearstain, learn to live.

Paul Celan
You opened your eyes -I saw my darkness live. I see through it down to the bed; there too it is mine and lives.

Paul Celan
Only one thing remained reachable, close and secure amid all losses: language. Yes, language. In spite of everything, it remained secure against loss.

Paul Celan
The poem is lonely. It is lonely and en route. Its author stays with it. Does this very fact not place the poem already here, at its inception, in the encounter, in the mystery of encounter?

Paul Celan
There's nothing in the world for which a poet will give up writing, not even when he is a Jew and the language of his poems is German.

Paul Celan
A poem, being an instance of language, hence essentially dialogue, may be a letter in a bottle thrown out to the sea with the-surely not always strong-hope that it may somehow wash up somewhere, perhaps on the shoreline of the heart. In this way, too, poems are en route: they are headed towards. Toward what? Toward something open, inhabitable, an approachable you, perhaps, an approachable reality. Such realities are, I think, at stake in a poem. 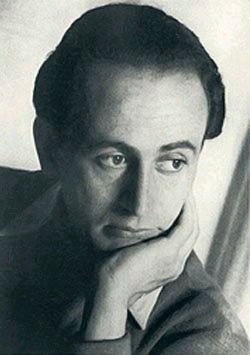 Wikipedia
Born: November 23, 1920
Died: April 20, 1970 (aged 49)
Bio: Paul Celan was a German language poet and translator. He was born as Paul Antschel to a Jewish family in Cernăuți, in the then Kingdom of Romania, and adopted the pseudonym "Paul Celan"..
Known for:
Most used words:
time, drink, death, master, rode, language, germany, live, grave