We breathed the air of freedom without knowing the language or any person.

Nelly Sachs
Someone
will take the ball
from the hands that play
the game of terror.


Nelly Sachs
We, the rescued,
Beg you:
Show us your sun, but gradually.
Lead us from star to star, step by step.
Be gentle when you teach us to live again.


Nelly Sachs
But for the homeless all ways wither
like cut flowers...

Nelly Sachs
Why the black answer of hate
to your existence, Israel?

Nelly Sachs
Here and there the lantern of compassion
can be shown to the fish,
where the fishhook is swallowed
or suffocation practiced.

Nelly Sachs
When sleep leaves the body like smoke and man, sated with secrets, drives the overworked nag of quarrel out of its stall, then the fire-breathing union begins anew.

Nelly Sachs
World, do not ask those snatched from death
where they are going,
they are always going to their graves.


Nelly Sachs
Earth, old man of the planets, you suck at my foot
which wants to fly.


Nelly Sachs
O the chimneys
On the ingeniously devised habitations of death When Israel's body drifted as smoke Through the air—
Was welcomed by a star, a chimney sweep,
A star that turned black Or was it a ray of sun?

Nelly Sachs
When sleep enters the body like smoke
and man journeys into the abyss
like an extinguished star that is lighted elsewhere,
then all quarrel ceases,
overworked nag that has tossed the nightmare grip
of its rider.

Nelly Sachs
So ending flows to beginning
Like the cry of a swan.
We are in a sickroom,
But the night belongs to the angels.


Nelly Sachs
A stranger always has
his homeland in his arms
like an orphan
for which he may be seeking
nothing but a grave.


Nelly Sachs
Dancer
woman in childbirth
you alone
carry on the hidden navel-string
of your body
the identical god-given jewels
of death and birth.


Nelly Sachs
In the others' choir
you always sang
one note lower
or one note higher.


Nelly Sachs
Peoples of the earth,
do not destroy the universe of words,
...
O that no one mean death when he says life —
and not blood when he speaks cradle.


Nelly Sachs
This chain of enigmas
hung on the neck of night...

Nelly Sachs
We mothers rock into the heart of the world the melody of peace.

Nelly Sachs
In the evening your vision widens
looks out beyond midnight —
twofold I stand before you —
green bud rising out of dried-up sepal,
in the room where we are of two worlds. 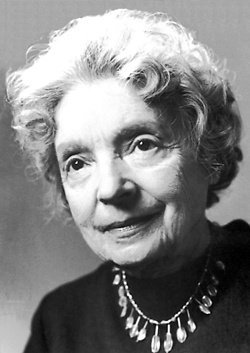 Creative Commons
Born: December 10, 1891
Died: May 12, 1970 (aged 78)
Bio: Nelly Sachs was a Jewish German poet and playwright whose experiences resulting from the rise of the Nazis in World War II Europe transformed her into a poignant spokeswoman for the grief and yearnings of her fellow Jews.
Known for:
Most used words:
star, death, body