I am actually pro-cursing. I think it's good. I think we should teach kids to curse, so they don't use drugs. It doesn't rot your brain. It doesn't get you pregnant. It doesn't kill you, like tobacco.

Paul Begala
What he has spent it on, apparently, is just hiring a bunch of staff people to wander around Utah and Mississippi and pick their nose. 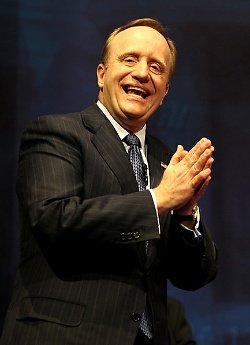 Creative Commons
Born: May 12, 1961 (age 60)
Bio: Paul Edward Begala is an American political consultant and political commentator. He was an adviser to President Bill Clinton.
Known for: