I alone, as the sharer of their way of life, presented a replica of childhood.

Neal Cassady
The time has come, everybody lie down so you won't get hurt when the sun bursts.

Neal Cassady
Art is good when it springs from necessity. This kind of origin is the guarantee of its value; there is no other.

Neal Cassady
Each day I lacerated myself thinking on her, but I didn't go back. 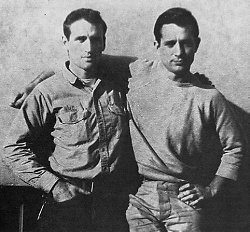 Born: February 8, 1926
Died: February 4, 1968 (aged 41)
Bio: Neal Leon Cassady was a major figure of the Beat Generation of the 1950s and the psychedelic and counterculture movements of the 1960s. He was prominently featured as himself in the original "scroll" version of Jack Kerouac's novel On the Road.
Known for: