Asking Hollywood to begin to show some restraint and balance in its antireligious fury is not the same as suggesting that the industry must transform itself into an agency for advancing the Word of God.

Michael Medved
The distortions and insults about organized religion will continue unabated as long as our popular culture continues its overall campaign against judgment and values. A war against standards leads logically and inevitably to hostility to religion because it is religious faith that provides the ultimate basis for all standards.

Michael Medved
Hollywood's persistent hostility to religious values is not just peculiar, it is positively pathological.

Michael Medved
My four years at Berkley represent two of the happiest weeks of my life.

Michael Medved
For many of the most powerful people in the entertainment business, hostility to organized religion goes so deep and burns so intensely that they insist on expressing that hostility, even at the risk of financial disaster.

Michael Medved
Why is it offensive to portray a creep and a murderer as a homosexual, but totally acceptable to present him as a religious Christian?

Michael Medved
The movie industry has ignored the success of films that look favorably on faith with the same sort of self-destructive stubbornness that has led to its continued sponsorship of antireligious-message movies. 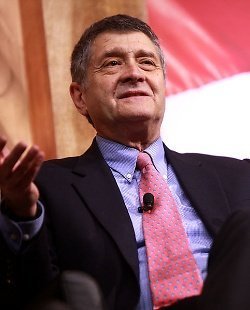