Oh lonesome's a bad place To get crowded into.

Kenneth Patchen
Have you wondered why all the windows in heaven were
broken?
Have you seen the homeless in the grave of God's
hand?
Do you want to acquaint the larks with the fatuous
music of war?


Kenneth Patchen
Dogs with broken legs are shot; men with broken souls write through the night.

Kenneth Patchen
The animal I wanted
Couldn't get into the world...
I can hear it crying
When I sit like this away from life.

Kenneth Patchen
Everyman is me. I am his brother. No man is my enemy. I am Everyman and he is in and of me. This is my faith, my strength, my deepest hope, and my only belief.

Kenneth Patchen
I am the magical mouse I don't eat cheese I eat sunsets And the tops of trees.

Kenneth Patchen
I'd like to die like this...
with the dark fingers of the water
closing and unclosing over these sleepy lights
and a sad bell somewhere murmuring good night.


Kenneth Patchen
Do I not deal with angels
When her lips I touch.

Kenneth Patchen
In literature as in life, to conform to anything is to knuckle under to your inferiors.

Kenneth Patchen
The question is not: do we believe in God? but rather: does God believe in us? And the answer is: only an unbeliever could have created our image of God; and only a false God could be satisfied with it.

Kenneth Patchen
It is fully practical to create that which has form in the silence. The noise art makes is usually heard by those whose lives listen to god. It is not adviseable to cheat that which has no other stake than the deeps and brights of all man.

Kenneth Patchen
I don't know how the rest of you feel,
But I feel drunk all the time.

Kenneth Patchen
Let us have madness openly, O men Of my generation. Let us follow The footsteps of this slaughtered age.

Kenneth Patchen
O my love my dear lady
The world is not very big
There is only room for our wonder
And the light leaning winds of heaven
Are not more sweet or pure
Than your mouth on my throat
O my love there are larks in our morning
And the finding flame of your hands
And the moss on the bank of the river
And the butterflies
And the whirling-mad
Butterflies!

Kenneth Patchen
I take the word Europe
Or the word death
And tear them into tiny pieces;
I scatter them at your feet.

Kenneth Patchen
Great mother of big apples it is a pretty
World!

Kenneth Patchen
Destiny is the music of the improbable. Were it otherwise, almost anyone could exist.

Kenneth Patchen
It's dark out, Jack, the stations out there don't identify themselves, we're in it raw-blind like burned rats, it's running out all around us, the footprints of the beast, one nobody has any notion of. The white and vacant eyes of something above there, something that doesn't know we exist. I smell heartbreak up there, Jack, a heartbreak at the center of things, and in which we don't figure at all.

Kenneth Patchen
You, the sought for; I, the seeker; this, the search:
And each is the mission of all. For greatness is only the drayhorse that coaxes
The built cart out; and where we go is reason.
But genius is an enormous littleness, a trickling
Of heart that covers alike the hare and the hunter.


Kenneth Patchen
You, the woman; I, the man; this, the world:
And each is the work of all.

Kenneth Patchen
Literature is what you write when you think you should be saying something. Writing begins when you'd rather be doing anything else: and you've just done it.

Kenneth Patchen
You, the village; I, the stranger; this, the road:
And each is the work of all. Then, not that man do more, or stop pity; but that he be
Wider in living; that all his cities fly a clean flag...
We have been alone too long, love; it is terribly late
For the pierced feet on the water and we must not die now. 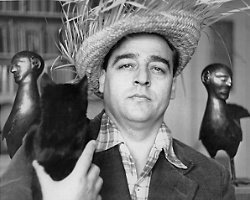 Wikipedia
Born: December 13, 1911
Died: January 8, 1972 (aged 60)
Bio: Kenneth Patchen was an American poet and novelist. He experimented with different forms of writing and incorporated painting, drawing, and jazz music into his works, which were often compared with those of William Blake and Walt Whitman.
Known for:
Most used words:
god, writing, man, music, love, dark