Where it is a duty to worship the sun it is pretty sure to be a crime to examine the laws of heat.

John Morley
You cannot demonstrate an emotion or prove an aspiration.

John Morley
Evolution is not a force but a process; not a cause but a law.

John Morley
You have not converted a man, because you have silenced him.

John Morley
The great business of life is to be, to do, to do without, and to depart.

John Morley
No man can climb out beyond the limitations of his own character.

John Morley
Of parliamentary life:
Having the singular peculiarity of being neither business nor rest.

John Morley
I want to take in all these labour questions from the largest possible nationalist point of view, and it is this—that while the State should do all that it prudently can to protect the health and life, not only of women and children, but of the whole assembly of workers, it is absurd, it is perilous to thrust Acts of Parliament, as I have said before, like the steam ram-rod into the delicate machinery of commercial undertakings.

John Morley
The proper memory for a politician is one that knows what to remember and what to forget.

John Morley
Excess of severity is not the path to order. On the contrary, it is the path to the bomb.

John Morley
The next great task of science is to create a religion for humanity.

John Morley
There are some books which cannot be adequately reviewed for twenty or thirty years after they come out.

John Morley
Nature, in her most dazzling aspects or stupendous parts, is but the background and theatre of the tragedy of man.

John Morley
Simplicity of character is no hindrance to subtlety of intellect.

John Morley
Although in Cabinet all its members stand on an equal footing, speak with equal voices and, on the rare occasions when a division is taken, are counted on the fraternal principle of one man, one vote, yet the head of the Cabinet is primus inter pares, and occupies a position which, so long as it lasts, is one of exceptional and peculiar authority.

John Morley
We are told by a Lord of the Admiralty who represents a Sheffield division that it is all over with the old Manchester school, and that we have got into new days. I do not belong to the Manchester school. I have nothing to say about the Manchester school except this—that I chanced to write the life of a very important leader of that school. and what did Mr. Cobden say upon this very point? He said:—"I am willing to spend a hundred millions on the fleet if necessary". The Radical party have never been the party who denied the great proposition that lies at the bottom of British politics—namely, that we must have absolute supremacy at sea.

John Morley
Those who would treat politics and morality apart will never understand the one or the other.

John Morley
Yet the Opposition refused to extend the franchise unless they were assured that there would be some manipulation or re-arrangement of seats, which, would, in fact, be taking away with one hand what was given with the other. He regretted that proportional representation should have been introduced into the debate from that side of the House, for all these schemes were but new disguises for the old Tory distrust of the people.

John Morley
In my creed, waste of public money is like the sin against the Holy Ghost.

John Morley
It is not enough to do good; one must do it the right way.

John Morley
I said years ago that I would rather be the man who helped on a rational scheme which should secure the comfort of old age than I would be a general who had won ever so many victories in the field. These are, to me, the two most tragic sights in the world—a man who is able to work, and anxious to work, and who cannot get work; and the other tragic sight is that of a man who has worked until his eyes have become dim, and his natural force has become abated, and he is left to spend the declining years of a life that has been so nobly used, so honourably used, in straits, difficulties, and hardships.

John Morley
I myself am no opponent of State intervention. I have never been, and never shall be, as soon as it is shown to me that State intervention can achieve some good end which cannot be reached without it. And I hope that opinion will soon turn in the direction of municipal intervention in these affairs, wherever municipal intervention is adequate, and I will tell you why... I believe that in municipalities the area of supervision is sufficiently small, that people concerned come up in sufficiently close quarters with the matters of administration to enable them to avoid all the dangers, risks, and wastes to which the general state of capitals is open. 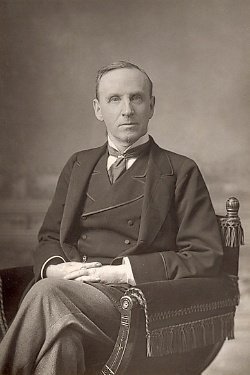