The end point, a cas simulation with a realistic interface, is highly desirable, because it enables an ecologist, or economist, or politician to try out alternatives that could not possibly tried in real systems.

John Henry Holland
If there is to be a competition, there must be some basis for resolving it. It is also clear that the competition should be experienced based.

John Henry Holland
There is more of a mystery to the origin of the pin factory that Adam Smith discusses in his Wealth of Nations than is generally realized.

John Henry Holland
Unwrapping occurs when the "solution" is explicitly built into the program from the start.

John Henry Holland
The measure of performance of any given agent is the amount of money it accumulates through its actions.

John Henry Holland
The multiplier effect is a major feature of networks and flows. It arises regardless of the particular nature of the resource, be it goods, money, or messages.

John Henry Holland
"Doing science," particularly the synthesis of disparate ideas, is not as arcane as it is often made out to be. Discipline and taste play a vital role, but the activity is familiar to anyone who has made some effort to be creative.

John Henry Holland
With theory, we can separate fundamental characteristics from fascinating idiosyncrasies and incidental features. Theory supplies landmarks and guideposts, and we begin to know what to observe and where to act.

John Henry Holland
Nonlinear interactions almost always make the behavior of the aggregate more complicated than would be predicted by summing or averaging.

John Henry Holland
When a new building block is discovered, the result is usually a range of innovations.

John Henry Holland
If we are to understand the interactions of a large number of agents, we must first be able to describe the capabilities of individual agents.

John Henry Holland
Particular individuals do not recur, but their building blocks do.

John Henry Holland
Even though these complex systems differ in detail, the question of coherence under change is the central enigma for each.

John Henry Holland
Looking back to data, we can see if the consequences are plausible; looking forward to theory, we can see if general principles are suggested.

John Henry Holland
The recycling of resource by the aggregate behavior of a diverse array of agents is much more than the sum of the individual actions.

John Henry Holland
Model building is the art of selecting those aspects of a process that are relevant to the question being asked. As with any art, this selection is guided by taste, elegance, and metaphor; it is a matter of induction, rather than deduction. High science depends on this art.

John Henry Holland
This use of building blocks to generate internal models is a pervasive feature of complex adaptive systems.

John Henry Holland
Evolution continually innovates, but at each level it conserves the elements that are recombined to yield the innovations. 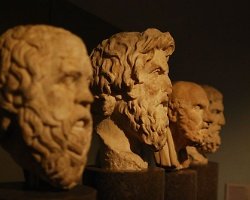 Creative Commons
Born: February 2, 1929
Died: August 9, 2015 (aged 86)
Bio: John Henry Holland was an American scientist and Professor of psychology and Professor of electrical engineering and computer science at the University of Michigan, Ann Arbor. He was a pioneer in what became known as genetic algorithms.
Known for:
Most used words:
building, theory, systems, art, agents