If God did not intend for us to eat animals, then why did he make them out of meat?

John Cleese
I find it rather easy to portray a businessman. Being bland, rather cruel and incompetent comes naturally to me.

John Cleese
A wonderful thing about true laughter is that it just destroys any kind of system of dividing people.

John Cleese
I'm struck by how laughter connects you with people. It's almost impossible to maintain any kind of distance or any sense of social hierarchy when you're just howling with laughter. Laughter is a force for democracy.

John Cleese
My biggest regret? Not being knighted by the Queen. I should have been a knight, and I would have been knighted, if I hadn't written one horrible horrible Python sketch ["Upper Class Twit of the Year"] which I deeply deeply regret.

John Cleese
The sad thing about true stupidity is that you can do absolutely nothing about it.

John Cleese
Six hundred years ago we would have been burned for this. Now, what I'm suggesting is that we've advanced.

John Cleese
If you want creative workers, give them enough time to play.

John Cleese
If I had not gone into Monty Python, I probably would have stuck to my original plan to graduate and become a chartered accountant, perhaps a barrister lawyer, and gotten a nice house in the suburbs, with a nice wife and kids, and gotten a country club membership, and then I would have killed myself.


John Cleese
Basil Fawlty was an easy character for me. For some reason, portraying a mean, uptight, incompetent bully comes naturally to me.

John Cleese
When you get to my age, and I'm 66 now, you realize that the world is a madhouse and that most people are operating in fantasy anyway. So once you realise that, it doesn't bother you much.

John Cleese
Yes it's her husband. She hasn't got over it. Died thirty years ago.

John Cleese
So Harry says, 'You don't like me any more. Why not?'
And he says, 'Because you've got so terribly pretentious.'
And Harry says, 'Pretentious? Moi?'


John Cleese
If I like chocolate it won't surprise you that I have a few chocolates in my fridge, but if you find out I've got 16 warehouses full of chocolate, you'd think I was insane. All these rich guys are insane, obsessive compulsive twits obsessed with money — money is all they think about — they're all nuts.

John Cleese
You see, you could never do a sketch like that these days. The audience is too uninformed. I blame the Americans. Nation of obese, violent, pig-ignorant, bible-thumping morons contaminating world culture. That's why I spend most of my time here in France. … Beautiful, isn't it? Just look at those olive trees.

John Cleese
Because these people are operating at a very very low level of mental health, they are incapable of understanding the teaching. 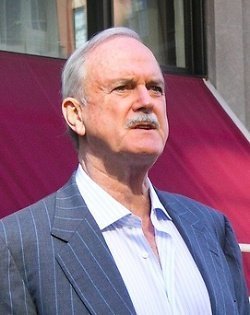 Creative Commons
Born: October 27, 1939 (age 82)
Bio: John Marwood Cleese is an English actor, comedian, writer and film producer. He achieved success at the Edinburgh Festival Fringe and as a scriptwriter and performer on The Frost Report.
Known for:
Most used words:
engineers, people, laughter