Gods fade; but God abides and in man's heart
Speaks with the clear unconquerable cry
Of energies and hopes that can not die.

John Addington Symonds
These things shall be — a loftier race Than e'er the world hath known shall rise With flame of freedom in their souls, And light of knowledge in their eyes.

John Addington Symonds
She smiled, and the shadows departed;
She shone, and the snows were rain;
And he who was frozen-hearted
Bloomed up into love again.

John Addington Symonds
They shall be gentle, brave and strong To spill no drop of blood, but dare All that may plant man's lordship firm On earth and fire and sea and air.

John Addington Symonds
Straight is the way to Acheron,
Whether the spirit's race is run
From Athens or from Meroe:
Weep not, far from home to die;
The wind doth blow in every sky
That wafts us to that doleful sea. 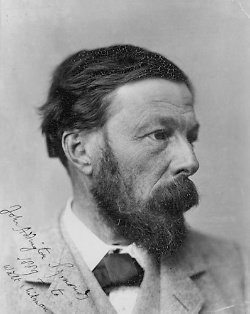 Creative Commons
Born: October 5, 1840
Died: April 19, 1893 (aged 52)
Bio: John Addington Symonds was an English poet and literary critic. Although he married and had a family, he was an early advocate of male love, which he believed could include pederastic as well as egalitarian relationships.
Known for: