No! No! Gentlemen, no emotion for me. But, those of congratulation. I am happy. To die is the irreversible decree of him who made us. Then what joy to be able to meet death without dismay. This, thank God, is my case. The happiness of man is my wish, that happiness I deem inconsistent with slavery, and to avert so great an evil from an innocent people, I will gladly meet the British tomorrow, at any odds whatever.

Johann de Kalb
It is with equal regret, my dear sirs, that I part with you. Because I feel a presentiment that we part to meet no more.

Johann de Kalb
Well, sir. Perhaps a few hours will show who are the brave.

Johann de Kalb
On the whole, I have annoyances to bear, of which you can hardly form a conception. One of them is the mutual jealousy of almost all the French officers, particularly against those of higher rank than the rest. These people think of nothing but their incessant intrigues and backbitings. They hate each other like the bitterest enemies, and endeavor to injure each other wherever an opportunity offers. I have given up their society, and very seldom see them. La Fayette is the sole exception; I always meet him with the same cordiality and the same pleasure. He is an excellent young man, and we are good friends... La Fayette is much liked, he is on the best of terms with Washington.

Johann de Kalb
Oh, no! It is impossible. War is a kind of game, and has its fixed rules, whereby, when we are well acquainted with them, we can pretty correctly tell how the trial will go. Tomorrow it seems, the die is to be cast, and, in my judgement, without the least chance on our side. The militia will, I suppose as usual, play the back game. That is, get out of battle as fast as their legs will carry them. But that, you know, won't do for me. I am an old soldier, and cannot run, and I believe I have some brave fellows that will stand by me to the last. So, when you hear of our battle, you will probably hear that your old friend, De Kalb, is at rest. 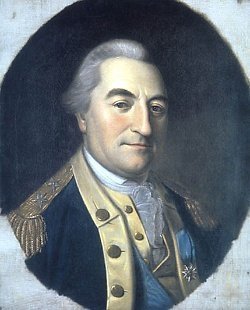 Creative Commons
Born: June 19, 1721
Died: August 19, 1780 (aged 59)
Bio: Johann von Robais, Baron de Kalb, born Johann Kalb, was a Bavarian-French military officer who served as a major general in the Continental Army during the American Revolutionary War and was killed in action while fighting the British Army during the Battle of Camden.