Tell you what, I've been through hundreds of battles. I've seen it all. Which country in the west have I not been to? Every time! You should know Mike Wallace, in the U.S. He's way above you all! I and he talked and laughed comfortably, which is why the media need to raise your level of knowledge. Got it, or not? I'm anxious for you all, it's true. You really, I. You guys are good at one thing.

Jiang Zemin
We want to learn from the west about science and technology and how to manage the economy, but this must be combined with specific conditions here. That's how we have made great progress in the last twenty years.

Jiang Zemin
This experience and the historical experiences gained by the Party since its founding can be summarized as follows: Our Party must always represent the requirements for developing China's advanced productive forces, the orientation of China's advanced culture and the fundamental interests of the overwhelming majority of the Chinese people. These are the inexorable requirements for maintaining and developing socialism, and the logical conclusion our Party has reached through hard exploration and great praxis.

Jiang Zemin
The Communist Party of China should represent the development trends of advanced productive forces, the orientations of an advanced culture and the fundamental interests of the overwhelming majority of the people of China.

Jiang Zemin
You are very familiar with western ways, but you are too young. You go everywhere to follow the big news, but the questions you ask are too simple — sometimes naïve. Understand, or not? 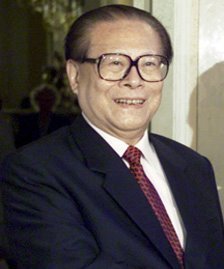 Creative Commons
Born: August 17, 1926 (age 93)
Bio: Jiang Zemin is a retired Chinese politician who served as General Secretary of the Communist Party of China from 1989 to 2002 and as President of the People's Republic of China from 1993 to 2003. Jiang has been described as the "core of the third generation" of Communist Party leaders since 1989.