It doesn't matter whether the cat is black or white, as long as it catches mice.

Deng Xiaoping
We mustn't fear to adopt the advanced management methods applied in capitalist countries (...) The very essence of socialism is the liberation and development of the productive systems (...) Socialism and market economy are not incompatible (...) We should be concerned about right-wing deviations, but most of all, we must be concerned about left-wing deviations.

Deng Xiaoping
The colour of the cat doesn't matter as long as it catches the mice.

Deng Xiaoping
A basic contradiction between socialism and the market economy does not exist.

Deng Xiaoping
A number of elderly comrades have taken practical steps to lead in the abolition of the system of lifelong jobs in leadership circles, thus promoting the reform of the cadre system. This episode is well worthwhile special and outstanding recording in the party's history.

Deng Xiaoping
Yellow cat, black cat, as long as it catches mice, it is a good cat.

Deng Xiaoping
[Hua Guofeng's time in office was] just a transition, not an epoch: his policies were a continuation of the late Mao, and there was nothing original about him.

Deng Xiaoping
When our thousands of Chinese students abroad return home, you will see how China will transform itself.

In a drama of the highest order there is little food for censure or hatred; it teaches rather self-knowledge and self-respect.
Percy Bysshe Shelley 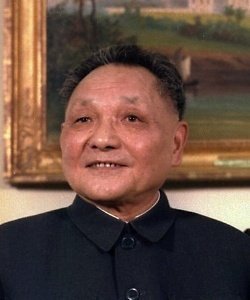 Creative Commons
Born: August 22, 1904
Died: February 19, 1997 (aged 92)
Bio: Deng Xiaoping was a Chinese revolutionary and statesman. He was the paramount leader of China from 1978 until his retirement in 1992. After Mao Zedong's death, Deng led his country through far-reaching market-economy reforms.