I think it's a good idea to tie Peter Mandelson to a van. Such an act would be cruel and barbaric and inhuman. But it would at least cheer everyone up a bit.

Jeremy Clarkson
I don't understand bus lanes. Why do poor people have to get to places quicker than I do?

Jeremy Clarkson
Speed has never killed anyone. Suddenly becoming stationary, that's what gets you.

Jeremy Clarkson
Nothing can prepare you for the yawning chasm of time that passes in Canada before the healthcare system actually does any healthcare.

Jeremy Clarkson
Boredom forces you to ring people you haven't seen for eighteen years and halfway through the conversation you remember why you left it so long. Boredom means you start to read not only mail-order catalogues but also the advertising inserts that fall on the floor. Boredom gives you half a mind to get a gun and go berserk in the local shopping centre, and you know where this is going. Eventually, boredom means you will take up golf.

Jeremy Clarkson
To argue that a car is simply a means of conveyance is like arguing that Blenheim Palace is simply a house.

Jeremy Clarkson
I wore a groove in the kitchen floor with endless trips to the fridge, hoping against hope that I had somehow missed a plateful of cold sausages on the previous 4,000 excursions. Then, for no obvious reason, I decided to buy a footstool.

Jeremy Clarkson
Then there's the styling. Or rather, there isn't. Any attempt to give these cars a tapering roofline or a curved rear end is wasteful of precious capacity, which means all of them look exactly – and I mean exactly – like chest freezers. And because they have such tiny wheels they actually look like chest freezers on casters. And that in turn means they look absurd.

Jeremy Clarkson
Does anyone really imagine for a moment that my wife gives two stuffs about global warming? She certainly did not appear to be all that bothered on Thursday evening when, during the great carbon-saving switch-off, I ran round the house furiously turning on every light, hair dryer, dishwasher and toaster.

Jeremy Clarkson
It's terrible. Biblically terrible. Possibly the worst new car money can buy. It's the first car I've ever considered crashing into a tree, on purpose, so I didn't have to drive it any more.

Jeremy Clarkson
Like every big organisation these days, the BBC is obsessed with the wellbeing of those who set foot on its premises. Studios must display warning notices if there is real glass on the set, and the other day I was presented with a booklet explaining how to use a door. I am not kidding.

Jeremy Clarkson
In the last couple of weeks everyone has been asking how on earth the greatest and most powerful nation on earth could be so crippled by a bit of wind and rain.
The rest of the world has natural disasters without the whole of society falling to pieces. So why is it different in America?
Well, if you stop and think about it, the answer is obvious.
America may have given the world the space shuttle and, er, condensed milk, but behind the veneer of civilisation most Americans barely have the brains to walk on their back legs.

Jeremy Clarkson
Let's be perfectly clear, shall we. The fox is not a little orange puppy dog with doe eyes and a waggly tail. It's a disease-ridden wolf with the morals of a psychopath and the teeth of a great white shark.

Jeremy Clarkson
Italy's youngsters complain, apparently, about having to live at home until they are 72 but that's because they spend all their money on suits and coffee and Alfa Romeos rather than mortgages.

Jeremy Clarkson
He genuinely looked terrified. The poor man, he's actually seen the books. In England we have this one-eyed Scottish idiot.

Jeremy Clarkson
I therefore have to use The Force. And weirdly, this doesn't work very well. I don't understand why, because on the last census, I put my religion down as Jedi Knight...

Jeremy Clarkson
There are many rules for the elderly in the Highway Code. I have one too, and here it is: get a bloody move on.

Jeremy Clarkson
Planet Earth thought it had £10. But it turns out we only had £2. Which means everyone must lose 80% of their wealth

Jeremy Clarkson
She can take a year to read something, whereas I like a book that becomes more important in my life that life itself. When I was in the middle of 'Red Storm Rising' by Tom Clancy - which was not selected for the Man Booker shortlist - you could have taken my liver out and fed it to the dog. And I wouldn't have noticed.

Jeremy Clarkson
Like many men, I can never find anything that I'm looking for, even when I'm actually looking at it. In a fridge, I think milk is actually invisible to the male eye. And so, it turns out, are dirty great holes in the fence.

Jeremy Clarkson
It seemed appropriate that I should develop some kind of illness. This is a good idea when you are at a loose end because everything, up to and including herpes, is better than being bored.

Jeremy Clarkson
Hurricane Katrina didn't just knock a few bricks from the fabric of a levee. More importantly, it knocked a few bricks also from the notion that America is a shining beacon of hope for a troubled world.
It isn't. It's a house of straw. With no education to glue that straw together. 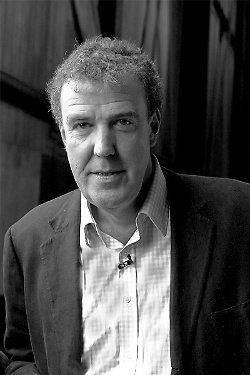 Creative Commons
Born: April 11, 1960 (age 61)
Bio: Jeremy Charles Robert Clarkson is an English broadcaster, journalist and writer who specialises in motoring. He is best known for co-presenting the BBC TV show Top Gear with Richard Hammond and James May from October 2002 to March 2015.
Known for:
Most used words:
boredom, set, america, car, earth