How pathetic for Donald Trump to criticize the president for 9/11. We were attacked and my brother kept us safe.

Jeb Bush
It turns out there are people, typically they're probably unemployed kids with student debt you know that are stuck in their parents' basement with Cheetos stains on their t-shirts that haven't been able to get their first job so what they do is they play games to see how long they can edit Wikipedia pages in order to have games with their friends all around the world. So my advice to you is, if you do have a Wikipedia page, check it once in a while....

Jeb Bush
You know what? As it relates to my brother, there is one thing I know for sure: he kept us safe.

Jeb Bush
What you need to know is that who I listen to when I need advice on the Middle East is George W. Bush.

Jeb Bush
I told my brother we were going to deliver Florida; we're going to keep that promise, aren't we? 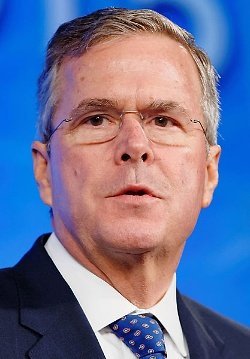 Creative Commons
Born: February 11, 1953 (age 69)
Bio: John Ellis "Jeb" Bush is an American businessman and politician who served as the 43rd Governor of Florida from 1999 to 2007. He is currently a candidate for the Republican nomination for President of the United States, in the 2016 U.S.