Nobody has to go hungry today. There is plenty of work for a man who wants to work. A kid can make plenty of dough for himself doing almost anything. I was hungry. I had to fight my way along. Freights and the like, fight, fight all the time. The life was tough, but it hardened you.

Jack Dempsey
When I was a young fellow I was knocked down plenty. I wanted to stay down, but I couldn't. I had to collect the two dollars for winning or go hungry. I had to get up. I was one of those hungry fighters. You could have hit me on the chin with a sledgehammer for five dollars. When you haven't eaten for two days you'll understand.

Jack Dempsey
Tall men come down to my height when I hit 'em in the body. 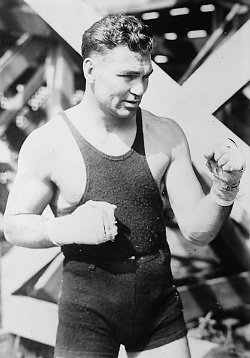