We are against the world war being fomented by the superpowers and also against all the local wars of aggression which they instigate or back.

Hu Yaobang
We should prepare more knives and forks, buy more plates and sit around the table to eat Chinese food in the Western style, that is, each from his own plate. By doing so, we can avoid contagious diseases.

Hu Yaobang
Journalists should give 80 percent of space to reporting good things and achievements and 20 percent to criticizing the seamy side of things and expose our shortcomings [...] This conforms with the reality of society.
Commenting on news content
Hu Yaobang
If you make the mistake of capitalism, you should not be criticized. But we should have self-criticism.

Hu Yaobang
On the reunification of Korea:
This reunification can be realized only on the premise that all foreign troops withdraw from South Korea.

Hu Yaobang
Kim Jong Il, one of the principal leaders of the Korea Workers' Party, had made an invited but unannounced visit to China last month. His visit has further enhanced the
amity between the two parties, two countries, and the people of China and Korea.

Hu Yaobang
The British had a poor record of retreating from colonies. There are more than ten years of transition period before our resumption of sovereignty. Will the British be irresponsible and "mess up" Hong Kong like comrade Deng Xiaoping said? We should be on guard. This is our major consideration for setting up the Joint Liaison Group. Surely, it will be beneficial for both countries, as other things may need to be settled by the two sides.
In a meeting with Xu Jiatun
Hu Yaobang 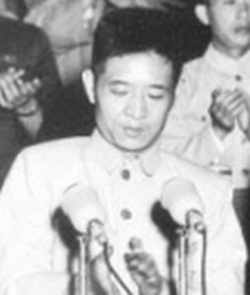