In our land the educated poor, who at the most can only cycle or take short railway journeys into the country from an adjoining town, are fast losing their rightful heritage — the beauty of the country-side, which is rapidly disappearing with very little benefit to anyone. Apparently nobody but a few timid adherents of the Archeological Society cares a straw.

Harry Johnston
Iceland, though it lies so far to the north that it is partly within the Arctic Circle, is, like Norway, Scotland, and Ireland, affected by the Gulf Stream, so that considerable portions of it are quite habitable.

Harry Johnston
It is the first rational exposition of the relations of mankind to the mystery which shrouds the how and wherefore of man's existence, the first honest protest against our long, long martyrdom. 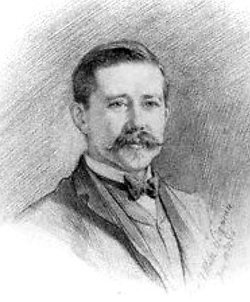 Creative Commons
Born: June 12, 1858
Died: July 31, 1927 (aged 69)
Bio: Sir Henry "Harry" Hamilton Johnston was a British explorer, botanist, linguist and colonial administrator, one of the key players in the "Scramble for Africa" that occurred at the end of the 19th century.
Known for: